In a major success to the Karnataka Police, the man who repeatedly vandalized idols of Hindu Gods have been arrested, confirmed the police on Friday. The accused told the police that he was breaking idols as he thought people were being deceived as they worshiped idols of stones.

Karnataka police have arrested a man who vandalized idols of Hindu Gods in Saligrama village near K R Nagar in this district of Karnataka. Further investigation is on.

However, they said his identity is kept confidential for security reasons.

The accused had broken the door of Sri Siddalingeshwara and Shri Male Mahadeshwara temple. After barging inside, he had broken ‘Shivlings’ installed inside the temple in Bherya village on December 7. The incident had created a tense situation in the region.

The accused had dethroned the statue of Hindu goddess Shri Lakshmi Devi and threw it into a well after deforming the idol. The incident had taken place in the limits of K R Pet Rural police station. He had also told police that when he was about to break the lock and enter Sri Anjaneya temple in Beeravalli village but he had to flee as people came.

The police said that accused had completed his SSLC (Class 10) and is into agriculture. He has gotten into the habit of breaking Hindu god’s idols for a long time.

District Superintendent R Chetan had visited the spot and a special team under the leadership of the Deputy Superintendent of Police Dr. A R Sumith was formed. The special team had gathered information about the accused and arrested him from Bherya village. The accused had confessed to the crime in the investigation.

He thought that people were being deceived as they worshiped idols. He did not touch gold and silver ornaments, embellishments, or cash kept in the temples. 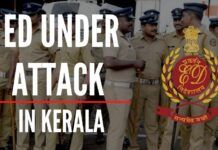