Another cold-blooded killing of Kashmiri Pandit in Valley

At a time when the Central government headed by Narendra Modi is focussing on the early return of Kashmiri pandits (living in exile in their own country) to their homes and hearths Pakistan based terrorist outfits are desperately spreading panic among the community members by resorting to selective killing of elected representatives and policemen.

A Kashmiri pandit family, who had not migrated from the Kashmir valley at the peak of militancy in 1990, Friday evening paid the heavy price for investing in peace after one of its sons, serving Jammu and Kashmir police was shot dead by ‘unidentified’ terrorists in Wanpoh area of Kulgam.

The deceased policeman, deployed with the Railway police, has been identified as Bantoo Ji Sharma. He was the lone bread earner of his family. Bloodthirsty terrorists targeted Bantoo Ji Sharma while he was returning home in civies after winding up days of work.

Bantoo Ji Sharma is survived by his wife, six-year-old daughter, and ailing mother. His father had died earlier.

This is the second targeted killing of police personnel in the last week in Kashmir valley.

On September 12, a newly recruited Sub-Inspector Arshad Ashraf Meer was ‘mercilessly’ shot dead in the Khanyar area of Srinagar.

Then in the month of June, Inspector Parvaiz Ahmad Dar, working with the criminal investigation department (CID) wing was shot near his house in Nowgam when he was returning home after offering evening prayers.

In August, terrorists had targeted public representatives across different parts of the Kashmir valley.

Another BJP Sarpanch Ghulam Rasool Dar along with his wife was ‘mercilessly’ killed by the terrorists inside their home in the Lal Chowk area of Anantnag on August 9. Three days later, a three-year-old nephew of a BJP leader Jasbir Singh (Mandal President) in Rajouri was killed in a grenade attack on his house in Rajouri.

On June 2, 2021, a Bharatiya Janta Party Councillor Rakesh Pandita was shot dead in Tral in the South Kashmir district of Pulwama. Pandita too was the sole bread earner of the family. He left behind an ailing mother, a specially-abled brother who was totally dependent on him for all his basic needs including medicine and daily chores, his son Paras, a class 12th student, and wife. The family had no other source of income.

Over half a dozen BJP leaders and their close family members were also killed by the terrorists last year.

On June 8, 2020 sarpanch Ajay Bharti, was killed in cold blood by the terrorists in the Anantnag area.

Aakash Mehra, son of a famous Krishna Dhaba owner, was shot at by motorcycle-borne terrorists in the Sonwar area of Srinagar on Feb 17, 2021. He succumbed to his fatal injuries, 11 days later in the SMHS hospital in Srinagar.

Before him, a famous jeweller Satpal Nischal from Punjab settled in Srinagar for several years was killed from a close range in the first week of January 2021. 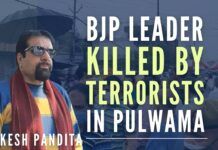