Targeted killing of a Kashmiri pandit sarpanch, Ajay Pandita, in South Kashmir district of Anantnag late Monday evening has once again sparked off a nationwide debate over the issue of return of Kashmiri pandits to their homes and hearths. The gruesome manner in which he was targeted in a broad daylight also raises question marks on the safety and security of thousands of migrant employees currently serving in Kashmir valley under the Prime Minister’s employment package.

Enraged over the targeted killing of Ajay Pandita, Kashmiri Pandit leaders and senior scholars asked the government to come clean and spell out its clear cut policy as regards addressing the issues affecting Kashmiri pandit migrant community living in Jammu and Kashmir and yearning to return to their homeland.

Ajay Pandita was a role model

Even before contesting Panchayat polls, Ajay Pandita along with his family had set an example by returning to Kashmir valley at a time when the majority of community members were still struggling to cope up with the pangs of migration.

With sheer dint of hard work and commitment towards the idea of India, Ajay Pandita along with his family rebuilt their home in their native village of Anantnag and stayed there ignoring threats and malicious campaigns against the members belonging to the Kashmiri pandit community. During their stay, they didn’t take any help from any government agency to resurrect their lives. The family raised loans and worked hard to bring back their orchards to life.

After winning the Panchayat polls in 2019 Ajay kept the tricolor high and worked hard to strengthen the grassroots democracy in Kashmir valley. In return, he along with thousands of other elected representatives were let down by the ruling elite by repeatedly ignoring their genuine concerns.

On Monday evening, when he was targeted by the unidentified terrorists he was unarmed. He was relaxing along with his father in his family orchard. According to his father, Dwarika Nath Pandita, a retired school teacher, Ajay received a message that someone wanted his signature and requested him to come out. Ajay initially resisted but decided to step out of his house along with his sister.

While he was moving towards one of the local shops two motorbike borne terrorists targeted him from behind and pumped bullets in his head and back. Ajay was rushed to the local hospital where he succumbed to his injuries. Late evening his family embarked on a return journey and shifted his mortal remains to Jammu where they performed his last rites in the presence of a large number of family friends, politicians, and elders from the Kashmiri pandit community.

Why did the government fail to provide security to elected public representatives?

In the past every time elected public representatives were targeted by the terrorists in Kashmir valley a lot of hue and cry was raised and delegations were sent to New Delhi to meet central leadership to put across their viewpoints and raise genuine concerns.

Even high-level meetings with the Union Home Minister and other central ministers were organized to cool down the tempers of the agitated elected members. But when it came to delivering on their past promises successive state and central governments faltered. Instead of empowering them and providing them adequate security cover, the government used them as mere pawns to serve their vested interests and score brownie points.

The public representatives were handpicked and provided security cover at the whims and fancies of the senior police officers or at the behest of powers at the helm of affairs.

In the case of Ajay Bharti too the security grid failed to provide him with adequate security cover on the basis of professional threat assessment. It was on 3rd December 2019, Ajay Bharti in a detailed interview with a local news portal had alleged how the government employees sitting in the higher offices have been shabbily treating them and ignoring their security concerns.

Now after his targeted killing, many eyebrows have been raised and questions have been asked to the ruling dispensation as to why they were delaying extending security cover to these grassroots workers and playing with their lives?

Terrorists belonging to a “masked outfit”, Tehreek Resistance Front (TRF) of LeT, JeM, Hizb, ISJK, killed this minority Kashmiri Pandit living without any security among Kashmiri Muslim population for over 20 years in Lukbawan.

Several community elders, who attended his cremation ceremony Tuesday claimed, Ajay Bharti not only returned to his roots but, he as a man of minority Kashmiri Pandit community dared to contribute to the strengthening of democratic and political setup in Kashmir. Despite doing all this he was punished brutally and killed in cold blood.

A senior Kashmiri pandits scholar said, “It is a lesson for all those, who have been castigating and delivering sermons to minority Kashmiri Pandits for their responsibility with regard to strengthening footholds of community in the valley and contributing to democracy in highly terror-ridden radicalized social setup of Kashmir.” Seeking straight answers from the government of the day, Kashmiri pandits raised some tough and pertinent questions.

Ajay Pandita was one among hundreds of Kashmiri pandits, who was present in Kashmir and was contributing to education, to the economy and political setup too. Today, we have listed him as yet another braveheart martyr in our records who overruled the suggestions and apprehension of threat perception and security aspects by every KP close to him and went back and settled in his village with the non-Hindu population. On the other hand, several prominent voices representing sarpanches and panches put pressure on the government to address the security concerns of public representatives vulnerable to such attacks. We have been demanding insurance cover, adequate security, and safe accommodation at selected places but so far not a single demand of our public representatives has been met or addressed by the Union Government, stated several sarpanches and panches while paying glowing tributes to Ajay Pandita.

Daughter and family members remember him as ‘Sher’

My father was a ‘Lion‘. He lived life on his own terms and did what he wanted to do. He represented local Muslims and Hindus in the area and never discriminated between them on the basis of their religion.

He tried to work for each one of them and it is for this reason when he decided to contest elections large numbers of local residents came forward and supported him. His elder daughter Sheen Bharti said, my father taught me the religion of humanity and we will continue to follow his footprints in life.

Fierce political battle on the anvil in Jammu and Kashmir 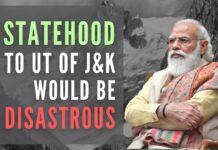 Team PGurus - June 17, 2021 0
India is actively engaged with Dominica for the deportation of Mehul Choksi On Thursday, India’s Ministry of External Affairs (MEA) said that it is actively...

Chronicle of an attack foretold

California almonds becoming a mode of terror funding by Pakistan based...