CPI(M) dumped the renaissance and resorted to Islamic fundamentalism

The CPI(M) leadership had staged a Renaissance Wall across Kerala on January 26 against the Citizenship Amendment Act (CAA), which saw millions of men and women standing like a human wall from Kasaragod to Thiruvananthapuram[1]. But when it was time for the local body election in the State, the CPI(M) dumped the renaissance and resorted to Islamic fundamentalism.

A drive through the Muslim dominated districts of Malappuram and Kozhikode will take you to a different era and place. If the traveler doubts whether he has reached Taliban Land, none can fault him. The flex boards spotted along the National highways passing through these districts are full of pictures of Muslim men soliciting votes for their wives who are contesting from municipal, panchayat, and block panchayat wards reserved for women[2].

The CPI(M) which swears by secularism, socialism, gender equality, and all other progressive ideas have taken a lead in this segment too by blacking out pictures of women candidates from flex boards and other advertisements.

As per Islamic custom (prevailing in Kerala), Muslim women do not pose for pictures as photography is haram for the community. The Islamic fundamentalists have been joined by the CPI(M) comrades who have installed flex boards featuring husbands of the women candidates pleading with voters to elect the party candidate…a candidate from amongst us! “Please elect Aamina Hassankunju, wife of Hassan Kunju from Pekkappilli Ward.” Please do not search for Aamina. But larger than life-size posters of Hassan Kunju is everywhere.

Appathinkattil Ali, Congress leader, pleads with voters to elect Haajra Ali, from the 13th ward in Vilayoor. There are no signs of Aamina and Hajara but their spouses are visible everywhere.

“Whom we need is a person from amongst us,” says Shamsuddeen, CPI(M) activist who pleads with voters to elect his spouse Jamsheela as ward councilor.

Mohammed Kunjippa, Muslim League leader is in the field for his wife Rejeena.

The CPI(M) which swears by secularism, socialism, gender equality, and all other progressive ideas have taken a lead in this segment too by blacking out pictures of women candidates from flex boards and other advertisements. The men comrades plead with the voters soliciting votes for their better halves. Interestingly all these candidates have been allocated the hammer-sickle-star symbol, the official symbol of the CPI(M).

“It is their way of telling the electorate that though they are contesting the election as CPI(M) candidates, they follow orthodox rules of the Islam,” said Ali Akbar, noted movie maker. He said that the orthodox Islamists are against displaying the photographs of women. “This is yet another sign that the Jamaat-e Islami has established its hold in the CPI(M)[3]. This does not augur well for the Muslim community in the State in the long run,” said Akbar. 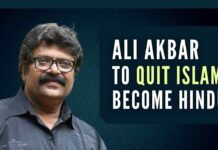 Your time is running out, Mr. Modi