[dropcap color=”#008040″ boxed=”yes” boxed_radius=”8px” class=”” id=””]W[/dropcap]ith the relentless rise of Hindu nationalism and the concomitantly steady decline of Left-liberal politics and discourse, we may be moving towards an era when our intellectuals would love Prime Minister Narendra Modi. This may sound ludicrous—haven’t they convinced themselves of his irredeemable evilness?—but this may happen sooner rather than later.

The attitude of the Ancien regime towards Hindu nationalism was clear and simple: no prisoners would be taken and no quarter would be given.

Once upon a time, all that was good, noble, and just was supposed to be on the side of the Congress and other ‘secular’ parties. The Bharatiya Janata Party, the Bharatiya Jan Sangh before it, the RSS, and other votaries of Hindutva were beyond the pale: our thought leaders told us. Hindu nationalists were the Indian versions of fascists and Nazis, to be comprehensively condemned and forthrightly dismissed. Their ideology, politics, views deserved only to be denounced with full force; it was heretical to even a give a hearing to what the saffron politicians and activists said. The attitude of the Ancien regime towards Hindu nationalism was clear and simple: no prisoners would be taken and no quarter would be given. Those were the days, the days when the Left was always right and the Right always wrong.

Even when intellectuals had to admire somebody like Atal Bihari Vajpayee, who was of or affected a Nehruvian temperament, they would use phrases like ‘the right man in the wrong party’ or ‘a good man in bad company.’ L.K. Advani, however, remained the bad guy for most of his political career, his badness emanating from his tireless work to build the biggest Hindu nationalist party, the BJP. And the cardinal sin that Advani committed, according to liberals, was the Ram Temple Movement that he spearheaded. The movement eventually strengthened the BJP to such an extent that it headed a coalition that completed a full term in office, the first non-Congress party to achieve the feat.

[dropcap color=”#008040″ boxed=”yes” boxed_radius=”8px” class=”” id=””]B[/dropcap]esides, in the secularists’ narrative, Advani also has the taint of the Babri Masjid demolition on December 6, 1992. In the early 1990s, he was the most hated politician. The soft-spoken, well-manner BJP patrician was compared with Hitler and other monsters of history.

But the times, they are a’changin—and changing very fast. Now, there is another monster on the horizon — Yogi Adityanath. The guy not only talks tough, like Modi, but also walks the talk, unlike Modi.

With the rise of Narendra Modi, however, Left-libbers realized what a gentleman Advani was. In the last few years, they have shown keenness to shower praise on him and, of course, Vajpayee—always Leftists favorite Rightist. Modi was the new fiend, ‘a mass-murderer,’ ‘merchant of death,’ et al; the former devil, Advani, became an angel in no time.

But the times, they are a’changin—and changing very fast. Now, there is another monster on the horizon — Yogi Adityanath. The guy not only talks tough, like Modi, but also walks the talk, unlike Modi. He said that he would shut down illegal abattoirs, and he did that; he said he would waive off farm loans, and he did that. You can debate on the correctness of decisions but there can be no doubt about the sincerity of the new Uttar Pradesh Chief Minister. He has already endeared himself to the vast number of Hindutva supporters; there is speculation that he is prepared by the saffron brigade for the post-Modi scenario; some people also see him a rival of Modi.

Whatever the truth maybe, the fact remains that from liberals’ perspective the universe of Indian politics has got afflicted with atrophy. Things are getting from bad to worse.

As we just noticed, it has happened in the recent past in our country. By the way, something similar has also happened in the US. Exasperated and incensed with President Donald Trump’s anti-establishment line, some liberals have already praised George Bush, Jr.—their erstwhile biggest hate object. For all we know, if Yogi and his ilk grow in strength, Modi might appear moderate to liberals.
Note:
1. Text in Blue points to additional data on the topic.
2. The views expressed here are those of the author and do not necessarily represent or reflect the views of PGurus. 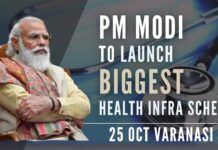 PGurus Newsdesk - October 27, 2021 0
Maximum tweets targeting Shami were from Pakistani agencies After India was defeated by 10 wickets in the Super 12 stage on October 24, it lost...

The WHO seeks additional clarifications for Bharat Biotech’s Covaxin

The Rs.8 lakh limit adopted after due deliberation for the OBC...