The Supreme Court on Wednesday admitted a writ petition filed by policyholders against the initial public offering (IPO) of Life Insurance Corporation of India (LIC) that got over early this week.

They also sought that Part III of Chapter VI of the Finance Act, 2021 be declared void ab initio for the certification of the Finance Bill, 2021 as a Money Bill to be in violation of and ultra vires Article 110 of the Constitution.

Among other, it sought that the respondents – the Union of India and the LIC – not to take any steps on the basis of or in furtherance of the amended Sections 4,5, 24, and 28 of the Life Insurance Corporation Act, 1956 including the ongoing initial public offering of the LIC.

It also sought that both the Centre and the LIC immediately issue all necessary communications to authorities including the SEBI, IRDAI, and the general public that the ongoing initial public offering of the LIC is rescinded in view of the orders of the apex court.

The queried about the delay in filing the case as LIC’s IPO process has ended and listing of the shares is to happen soon, Rajendra Dev said, “Earlier some cases were filed but didn’t succeed. It was only later that details about the valuation of LIC and the issue price were available.” 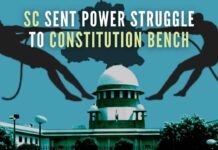