So far more than Rs.150 crore have been siphoned off through accounts provided by Vineet and Zhang

A Chinese national Yu Zhang and Vineet Jhaver, a resident of Haryana have been arrested by the Intelligence Fusion & Strategic Operations (IFSO) Unit of Delhi Police‘s Special Cell for extorting money from people through instant loan applications, an official said on Wednesday.

In August this year, the IFSO unit busted various modules of instant loan applications having a Chinese connection and arrested 22 people for allegedly siphoning off Rs.500 crore to China by the hawala route or by investing in crypto-currency.

The accused identified as Chinese national Yu Zhang is the mastermind behind the extortion racket. The police said that so far more than Rs.150 crore have been siphoned off through accounts provided by Vineet and Zhang.

The police said that multiple complaints were being received at the NCRP portal that instant loan applications are disbursing loans at higher rates and even after repayment of the loan, they are extorting money using morphed nude pictures.

“IFSO took cognizance of the same and started analyzing the complaints at NCRP. During the analysis of the complaints, it was found that more than 100 such apps are involved in the loan and extortion racket,” said Prashant Gautam, Deputy Commissioner of Police (IFSO).

“This data was also sold to different private firms. The customers were receiving calls from different numbers (procured on fake IDs) forcing them to pay more and more by threatening them using the morphed pictures. Due to fear and stigma, the users began paying them money in different bank accounts opened against fake IDs,” said the official.

“The money collected was diverted to specific bank accounts and then sent out of the country through hawala or after purchasing crypto currencies. People who were in dire need of a small loan ranging from Rs.5,000 to Rs.10,000 were being forced to pay even in lakhs,” said the official.

“Many incidents of citizens committing suicide were reported from various parts of the country. The financial trail revealed that multiple mule accounts were being used for getting the amount. In each of the accounts, huge transactions were found to be credited every day,” said the DCP.

“It was found that the network is spread across Delhi, Karnataka, Maharashtra, Uttar Pradesh, Gujarat, and other parts of the country. Earlier, in similar cases, 22 persons have been arrested and with further investigation, the mastermind in the present case, a Chinese national, along with an Indian accomplice has been arrested,” said the DCP. 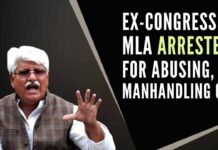 ED attaches property of Kerala man who cheated 900 people in...