Amid the political turmoil in Maharashtra, Governor Bhagat Singh Koshyari has directed the ruling Maha Vikas Aghadi government of Shiv Sena-Nationalist Congress Party-Congress to take a floor test and prove its House majority on June 30 (Thursday).

Guv Koshiyari has convened a one-day Special Session of the Maharashtra Legislative Assembly Thursday with a single-point agenda of a trust vote against Chief Minister Uddhav Thackeray in view of the political upheavals along with legal, and procedural issues witnessed in the past nine days.

The Special Assembly will convene at 11 a.m. and end at 5 p.m. Thursday. The day’s proceedings shall be video-graphed and telecast live, with provisions for adequate security both inside and outside the legislature, the Governor has directed.

A 3-page letter (given below) to the effect has been issued to the Maharashtra Legislature Secretary by the Raj Bhavan late on Tuesday — soon after a delegation of the Opposition Bharatiya Janata Party (BJP) met the Governor and urged him for immediate directions to the MVA to prove its majority. 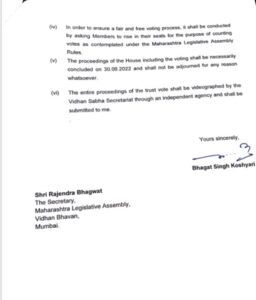 “As the Constitutional head of the state, I must ensure that the government functions with the support and confidence of the House. Thus, I have issued a communication to the CM calling upon him to prove his majority on the floor of the House on 30.06.2022,” said the Governor, taking note of the BJP plea and other aspects.

Meanwhile, Shiv Sena Chief Whip, Sunil Prabhu has filed a petition in the Supreme Court against the Governor’s floor test directive. The matter will be mentioned before the vacation bench of the apex court shortly. Senior advocate Abhishek Manu Singhvi told an SC bench comprising Justices Surya Kant and J B Pardiwala that the floor test is illegal as it cannot include persons facing disqualification. I am only requesting for listing today evening. Otherwise, the matter will become infructuous. He asked for a hearing in the evening citing that the notice for the floor test was received today morning itself.

The meeting of the Maharashtra BJP core committee will take place at 2 pm at ‘Sagar‘- the official residence of Leader of Opposition Devendra Fadnavis today. 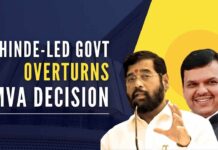 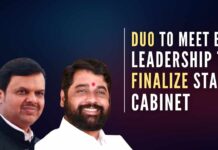