After losing her mentor and party patron Mufti Mohd Sayeed long ago, now the majority of top party leaders have dumped Mehbooba Mufti at this crucial juncture.

The Peoples Democratic Party units at the provincial level in both Jammu and Kashmir regions are speaking in different voices and tug of war is going on between regional leaders to establish their supremacy over each other.

He is expected to lead a group of Kashmir based leaders or lend support to them to kick start stalled political process in the region under the leadership of Syed Altaf Bukhari.

Under the prevailing circumstances, several senior party leaders have also come out in rebellion and openly questioning the style of Mehbooba Mufti.

Only trusted aides and a handful of close family members, in the party, are still holding the party flag.

Around one dozen leaders were expelled by the party in the last three days. Several among them had attended meetings with a fifteen-member delegation of foreign envoys. Instead of welcoming the move, the party decided to expel them.

One of the chief architect of PDP’s self-rule slogan and founding member of the Peoples Democratic Party, Muzaffar Hussain Baig too has shifted the blame on her claiming provocative statements made by her resulted in a downgrading of the status of the erstwhile state of Jammu and Kashmir to a Union Territory.

So far, Baig, who distanced himself from these statements, has not left the party but is seen as an open challenger to PDP Chief Mehbooba Mufti. In the coming days, he is expected to open his cards, kept close to his chest. He is expected to lead a group of Kashmir based leaders or lend support to them to kick start stalled political process in the region under the leadership of Syed Altaf Bukhari.

Senior party spokespersons either remain mum or have adopted muted silence. The party is no longer attracting new entrants.

Some of the trusted aides of PDP Patron Mufti Mohd Sayeed continue to remain loyal to Mehbooba Mufti but they are not in a position to contain the rebellion. Many among them are currently serving a jail term since the abrogation of Article 370 and Article 35-A.

At present her elder daughter Iltija Mufti is keeping her alive at least on the social media platforms.

She is tweeting frequently and expressing her opinion using the twitter handle of her mother. Senior party spokespersons either remain mum or have adopted muted silence. The party is no longer attracting new entrants.

Party leaders jumped the ship in search of greener pastures

Over one dozen party leaders, including former ministers and legislators, have left the party in search of greener pastures. At last count, Mehbooba Mufti is leading only a handful of leaders.

In response to their unceremonious ouster, four more senior PDP leaders announced their resignation from the party.

Those who have resigned from the party are former Rafiabad MLA Yawar Mir, Muntazir Mohiuddin and former president of the party’s youth wing Showkat Gayoor.

The three confirmed that they have resigned from the party but did not specify their future plans.

Yawar is the son of Mohammad Dilawar Mir, who was among the eight leaders expelled by the PDP. The expelled leaders have thrown their weight behind former PDP leader Syed Altaf Bukhari and were part of a delegation that met Lieutenant Governor G C Murmu On Tuesday.

They also met the visiting envoys from 15 countries who arrived here on Thursday on a two-day visit to Jammu and Kashmir.

Speculations are rife that Bukhari is launching a new political party with the help of disgruntled leaders in the PDP, Congress and other parties.

Last year in July, another senior founding PDP member Mohammed Khalil Bandh had resigned from the primary membership of the party saying it was not worth continuing when the basic and founding principles of the party had been compromised.

In January 2019, PDP had expelled former Jammu and Kashmir finance minister and one of the most influential Peoples Democratic Party leaders, Altaf Bukhari for “anti-party activities”. Four former PDP ministers had initially left the party immediately after the assembly was dissolved by Governor Satya Pal Malik in November 2018. 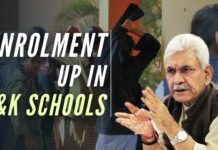