[dropcap color=”#008040″ boxed=”yes” boxed_radius=”8px” class=”” id=””]W[/dropcap]hat is the biggest political risk to Indian economy? In other words, what can derail the development agenda of Prime Minister Narendra Modi? It is undoubtedly the left intellectuals and proponents of a welfare state whose unabashed support for the so called Nehruvian Consensus and rabid opposition to a development agenda of the current government that pose a real and clear danger to progress and prosperity of India.

For sixty years, policy making in New Delhi was influenced by this group. Under the aegis of Congress party, their ideas went unchallenged during all those years. Decimation of their main sponsor in the 2014 general election has left them without a platform. In the realm of decision making, they are a spent force and their ideas are now unwanted. Sensing that a revival of Congress party is unlikely to happen in the foreseeable future, they have taken up the cudgels themselves by writing open letters to the Prime Minister, filling the editorial pages of India’s major newspapers and answering questions on television from sympathetic studio anchors.

Nehruvian Consensus has ruled the roost in India since independence – in economic, cultural and foreign policy milieu.  Named after the first Prime Minister of India, Mr. Jawaharlal Nehru, who was at the helm of government affairs for seventeen years, it has come to mean an active state and a major role for Public Sector Organizations in the economy while culturally epitomizing an “Idea of India” that was far removed from the ethos and values of Indians. In foreign policy, to avoid cold war politics, Nehru was a co-creator of the Non-Aligned Movement (NAM).

[dropcap color=”#008040″ boxed=”yes” boxed_radius=”8px” class=”” id=””]P[/dropcap]rime Minister Narendra Modi and his party, the Bharatiya Janata Party (BJP), is the anti-thesis of this Nehruvian Consensus. They won a thumping victory in the recent general election campaigning on the idea of development and job creation (rejection of welfare state), justice for all and appeasement to none (rejection of Idea of India) and a major role for India in shaping geopolitics and economics (rejection of NAM) in what is increasingly an intertwined global economy.

The overwhelming mandate from voters is to undo and confine the Nehruvian Consensus to the dustbin of history. Prime Minister Modi indeed has made a solid start towards fulfilling his campaign promises. By eliminating the much derided Planning Commission and confining the Mahatma Gandhi Rural Employment Guarantee (MNREGA) Act to the 200 most impoverished districts, he has signaled a beginning for an Indian economy that has been teetering under subsides and neglecting investments in education, health and other public goods for a long time. He has focused his attention on job creation by proposing to abolish obsolete laws and loosen pernicious parts of Industrial Disputes and Land Acquisition Acts. He also wants state and local governments to co-operate in order to push India’s ranking in the Ease of Doing Business index to well below 100 from the current ranking of 134.

Unfortunately, he faces staunch opposition from the Nehruvian Consensus believers for such an agenda. Abolition of Planning Commission was ridiculed while a group of prominent economists wrote a letter to the Prime Minister asking him not to tamper with the MNREGA program. His Finance Minister, an establishment man, regrettably is not helping his cause. He is more adept at politics than managing the economy and should have been shunted out in the recent cabinet reshuffle. Modi’s agenda would have gained much needed momentum had he appointed someone who is open to transformational and disruptive ideas like himself.

[dropcap color=”#008040″ boxed=”yes” boxed_radius=”8px” class=”” id=””]T[/dropcap]he Ideological left represented by the left parties have been completely eliminated in India by the voters themselves. The left parties which were the second largest bloc after the Congress party in India’s first Lok Sabha have now been reduced to teens marking their irrelevance in Indian politics. The task of taking on the non-ideological left intellectuals and backers of welfare state has befallen on the current Prime Minister and his ministerial colleagues. These intellectuals indeed pose an imminent threat to India’s speedy march towards progress and prosperity. Prime Minister in his recent speech to NITI Aayog rightly stressed the need for speedy transformation. How the current government wades through the challenges posed by this group will determine India’s economic growth rate, influence in geopolitics and the pace of transformation in the coming decades. 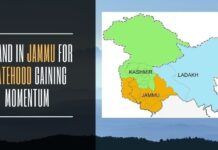