CM Yogi ordered strict action in the case of lynching

In a shocking incident that took place in the Kathgharhi village in the Kushinagar district of Uttar Pradesh, a youth named Babar Ali was lynched because he campaigned for Bharatiya Janata Party (BJP) and distributed sweets after the Yogi Adityanath the government was formed.

Babar was lynched by his neighbors just for celebrating BJP win in Uttar Pradesh Assembly Election 2022.

Chief Minister Yogi Adityanath condoled the death of Babar Ali and offered condolences to his family. He directed the officials to conduct a fair investigation in the matter. The police have registered an FIR and arrested two accused and sent them to jail, while efforts are being made to arrest the other accused.

According to reports, the family members of the deceased Babar said that the people living in the neighbourhood were angry because Babar was campaigning for the BJP. Many times Babur was warned that he should not campaign for the BJP.

While Babar celebrated BJP’s win, he was severely beaten up by his neighbours and relatives.

Babar was beaten badly and then thrown down from the roof. Seriously injured in the attack, he died during treatment at the hospital. After this, Babar’s wife has lodged a case against the accused at Ramkola police station.

He was taken to the district hospital and later to Lucknow, where he died during treatment on Sunday 27th March 2022.

The hatred of his neighbour’s didn’t stop even after Babar’s death. When the body of the deceased reached the village, people were enraged. People refused to perform the last rites of the body.

After the assurance of MLA P N Pathak and administrative officials, the family agreed to perform the last rites. The area MLA himself shouldered the body of the deceased. 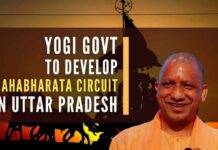