In a setback for AIADMK leader O Panneerselvam or OPS, rival leader Edappady K Palaniswami, also known as EPS, was today elevated as the interim general secretary of the party in a crucial meeting. The AIADMK also assured action against Panneerselvam after its General Council members demanded action to expel him from the organization.

Unitary leadership returned to AIADMK after five years as the party adopted a fresh resolution on Monday, favouring the appointment of Edappadi K Palaniswami as its interim General Secretary.

The party members accused Panneerselvam of siding with the DMK regime and working to weaken the AIADMK. Responding to his expulsion, O Panneerselvam said he was elected as the coordinator by “1.5 crores” party workers and that neither EPS nor another leader had the right to expel him.

At the crucial General Council Meeting held today, AIADMK annulled the dual leadership structure and went on to remove rival O Panneerselvam from the primary membership of the party.

The AIADMK General Council cited difficulty in decision-making and discontentment among party cadre while scrapping the posts of Coordinator and Joint Coordinator, held by O Panneerselvam and Palaniswami respectively. Under the dual leadership, the AIADMK had suffered three successive poll defeats.

A total of 16 resolutions were passed at the AIADMK General Council Meeting at the party office in Vanagaram, Chennai, amid much opposition from the OPS. The AIADMK General Council adopted a resolution to revive the post of general secretary, enabling all primary members of the party to elect one person for the party’s top post; to elect the general secretary. 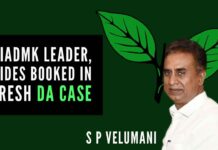 Jammu and Kashmir women became full citizens only on August 8,...