PDP-BJP alliance back on track

[dropcap color=”#008040″ boxed=”yes” boxed_radius=”8px” class=”” id=””]T[/dropcap]he PDP Chief Mehbooba Mufti and PM Narendra Modi’s meeting on Tuesday ended in a positive note and after the PDP-BJP meet it was said that in a week’s time the new government in Jammu & Kashmir is expected to be in place.

As Mehbooba met the prime minister at his official 7 Race Course residence, a senior Peoples Democratic Party leader and former minister Nayeem Akhtar said that “Hopefully, the (new) government should be in place by March 29.”

The state was put under the governor’s rule on January 9 after the death of chief minister Mufti Mohammad Sayeed on January 7 in All India Institute of Medical Sciences here, since then, Jammu and Kashmir has been without an elected government.

The new government will end the political stalemate prevailing in the state ever since.

The almost half an hour meeting put the PDP-BJP alliance is firmly back on track as Modi praised Sayeed as “a visionary” and said, “We must follow the positivity of Mufti Sayeed, sources said.

The meeting came days after Mehbooba flew back to Srinagar rather upset after the Bharatiya Janata Party (BJP) snubbed her over the PDP’s fresh conditions for the continuation of their alliance in the state.

[dropcap color=”#008040″ boxed=”yes” boxed_radius=”8px” class=”” id=””]B[/dropcap]JP general secretary Ram Madhav, in charge of the party’s affairs in Jammu and Kashmir, said last week that the BJP will not accept any fresh demands and conditions from the PDP after Mehbooba’s meeting with BJP president Amit Shah failed to break the deadlock.

But on Tuesday, she appeared upbeat, dropping hints that a new government in Jammu and Kashmir may be formed soon.

“It has been a positive meeting with the prime minister. I will go back to Srinagar and take the next step,” Mehbooba told the media as she emerged from Modi’s residence.

“I am content after meeting the prime minister. I feel positive after this meeting.”

Asked if she would be sworn in soon as the chief minister, Mehbooba replied: “I have been authorised to take the final call on the government formation and hold discussions regarding the issue by the party’s legislature party.”

She said she had called for a PDP legislature party meeting on Thursday and will take further decision there. “There is a particular forum to make announcements. Everything can’t be announced here,” she said.

[dropcap color=”#008040″ boxed=”yes” boxed_radius=”8px” class=”” id=””]A[/dropcap]sked if Modi gave any assurance regarding her party’s demands over the new government’s formation, Mehbooba said: “When you meet the prime minister of the nation and discussions held are positive, then naturally we find more ways to get solutions to the problems faced by the people of Jammu and Kashmir.”

Mehbooba arrived in New Delhi on Monday in an indication that the channels of communication with the BJP have been restored.

The PDP-BJP coalition government in Jammu and Kashmir came to power in March 2015 after the assembly elections gave a fractured mandate.

Mehbooba dragged her feet over government formation after her father’s death, and refused to take oath as the new chief minister till several PDP demands were met by the BJP-led central government.

It was not immediately known what led to Mehbooba’s change of heart. However, there were reports that a group of defectors from the PDP was readying to support the BJP if Mehbooba did not relent from her apparently non-negotiable stand.

The defection threat reports came even as Jammu and Kashmir has the toughest anti-defection law in the country. No number of lawmakers can defect from a political party to claim a split, as per the law.

“Even if all the 27 PDP MLAs had chosen to defect, the party president could still write to the assembly speaker, declaring the breakaway group as defectors and seek action against them as per the anti-defection law,” a constitutional expert in Srinagar said. Can BJP afford to do business with Sajjad Lone in 2019 ? 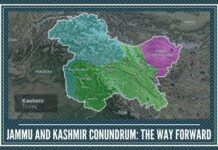 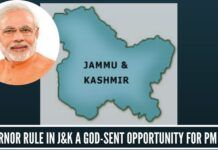 Lies don’t have legs but who knew they had wheels!