[dropcap color=”#008040″ boxed=”yes” boxed_radius=”8px” class=”” id=””]T[/dropcap]he Supreme Court on Wednesday directed the central government to prepare a memorandum of procedure that will be followed by the apex court collegium in the appointment of judges to the higher judiciary.

Pronouncing the order, the apex court constitution bench headed by Justice Jagdish Singh Khehar said that the government will prepare the memorandum of procedure in consultation with the Chief Justice of India who in turn will undertake the exercise with the unanimous opinion of the five-member collegium.

The collegium consists of Chief Justice of India and the four senior most judges immediately following him.

The court said that the eligibility criteria for the appointment of judges would include minimum age, both at the level of high court and the Supreme Court and a transparent method will be followed. However, the court in a rider said that confidentiality in the appointment would be maintained. 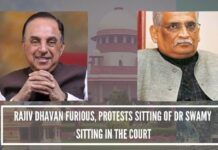 Over 4,000 km of road construction in the NorthEast to improve...

After paying Rs. 25 lakhs, Art of Living wants to give...