The arrest of several left activists has created a huge furor in the media. The Bharatiya Janata Party (BJP) govt has even been accused of introducing Emergency de facto. I am firmly against illegal arrests. Everything has to be done by the due process of law. However, what I find totally hypocritical and disgusting is the selective approach of the Indian left when it comes to human rights violations.

It’s high time the issue of human rights violation either by the police or by civilians is taken out of the mire of partisan politics and is viewed as illegalities which have no place in a democratic society.

Over three lakh Kashmiri Hindus were kicked out of their homes in the Valley at gunpoint. None of the left activists condemned that. In fact, Arundhati Roy and Prashant Bhushan want the Kashmiri Muslims to be given azadi. Isn’t that a violation of the Constitution? Why was the left silent when recently a group of men which hoisted the national flag at Lal Chowk in Srinagar was beaten up by separatists?

The CPI’s D Raja and co. are condemning the current arrests. But it was the Communist Party of India (CPI) which endorsed the infamous Emergency imposed by Smt Indira Gandhi. The Communist Party of India-Marxist (CPM), which misruled West Bengal for several decades, unleashed terror on political dissenters. An entire generation of youth was wiped out by the CPM cadres and the Congress govt of Siddharth Shankar Ray by labeling them Naxalites. No one protested then.

In Kerala, RSS workers, including those engaged in flood relief, are killed by the CPM. But no protests from the activists.

When the BJP govt in Maharashtra arrests Sanatan activists for allegedly planning to strike terror the police action, without incriminating evidence, is justified. But when the same govt talks of a Maoist plot then all hell breaks loose. In fact, Chief Minister Fadnavis has turned the left-right debate on human rights on its head by arresting the Sanatanis.

The Congress which has the blood of 3000 Sikhs on its hands has no moral right to condemn the recent arrests. By the way, I am yet to come across a single leftist activist who condemned the gunning down of scores of innocent Hindu bus passengers by Khalistani terrorists.

Also, I don’t find anyone exposing the leader from Maharashtra who masterminded the 1993 riots of Mumbai just to fulfill his political ambition. He is again fomenting casteist violence and has even got certain Muslim activists to abet in it in Maharashtra.

It’s high time the issue of human rights violation either by the police or by civilians is taken out of the mire of partisan politics and is viewed as illegalities which have no place in a democratic society. 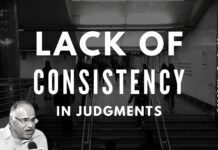 R V S Mani on the lack of consistency in judgments and the causes for it, using two similar cases 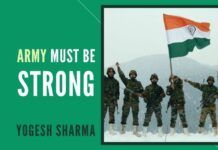 Is Prashant Kishor a political mercenary – a Desi version of...