The best gift to Bharat and one of its greatest son’s (Bhimji’s) legacy would be for the BJP and BSP to come together acknowledging their natural brotherhood.

The Bharatiya Janata Party-led National Democratic Alliance (BJP-NDA) is the first major national party or coalition to have a backward community Prime Minister from a truly humble background, that is the current Prime Minister Modi. Bharat Ratna Dr Ambedkar would have been proud to see such a development. An ardent critic of the caste-by-birth system but he was an open and unashamed supporter of the Hindu culture, in his own words. He converted to Buddhism because, as it is part of the Hindu culture. He was also a nationalist who stated that he would lay his life for his country even though he had disagreements with some of his upper-caste Hindu brethren[1]. Unfortunately, his scholarly works on economics and other subjects have received the least attention from the Left cabal and his patriotic nationalism has been buried by the Left so that an ordinary citizen cannot understand the multiple facets of this dynamic leader.

Mayawati, in spite of occasional misadventures, is one of the best Ambedkarite politicians today.

The Rashtriya Swayamsevak Sangh (RSS) is known to have Bharat Ratna Ambedkar’s portrait in all its Karyalayas (headquarters) across India and he is hugely respected and admired by the Sangh. It is also recorded that when Ambedkar had visited their camps he was in praise and admiration for the caste-less nature of the Sangh where everybody slept, ate and lived together as a single family, all Swayamsevaks from the old Kshatriya families to the strict Brahmin families to the now so-called Dalit communities. The only advice he had for RSS was he wanted their methods to be speedier and penetrate the society faster. Even that is obviously a backhanded compliment[2].

Mayawati, in spite of occasional misadventures, is one of the best Ambedkarite politicians today. Unlike the casteist Dalit parties of the South Indian politics or the middle-caste casteist politics of the Samajwadi Party (SP), the Bahujan Samajwadi Party (BSP) and its leader Mayawati has always proactively worked with the Brahmins without any hatred or ill-will as much as she cared for people from the Dalit communities. She is said to have had 20 Brahmin ministers in her ministry when she was the chief minister, which is a sure sign of integration and cooperation in spite of any political motives that might be attributed to it. Is it not the same as what Bhimji observed in those RSS camps he visited? Is not in the same spirit of BJP with a backward class prime minister?

The BSP has repeatedly shown that it can rise above casteist politics when compared to its regional compatriots not just in the UP but across the rest of India.

Even during the last parliamentary elections of 2014, in Uttar Pradesh (UP) Mayawati’s first list of candidates included about 50 per cent Brahmins in it[3]. In the 2017 assembly elections for UP, she had 113 upper caste candidates in her party’s list[4]. What better barometer of Hindu unity and anti-casteist display of mutual respect can there be?

It would have put Bhimji in cloud nine if only he had been alive to see this. His second wife was a Brahmin. His surname itself is Brahmin, his original surname being Sakpal, having got the surname given to him by his Brahmin teacher (whose surname was Ambedkar) who admired the talented and bright young boy that he was in school[5].

Thus the best gift to Bharat and one of its greatest son’s (Bhimji’s) legacy would be for the BJP and BSP to come together acknowledging their natural brotherhood. It is also the best expression of gratitude that the BJP can show to its RSS roots, whose Swayamsevaks and Pracharaks live the life that Bhimji dreamt of and admired, that is the equality of all castes. And, the BSP has repeatedly shown that it can rise above casteist politics when compared to its regional compatriots not just in the UP but across the rest of India. 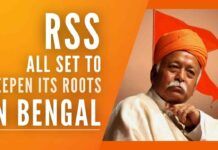 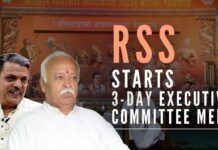