Will the Pope himself take the moral responsibility and resign for not acting against the priests’?

There is a new controversy surfaced with the Vatican and this time it involves the “Pope” who is at receiving end. He is answerable on the allegation for not acting on the Jury report and a letter from Archbishop Carlo Maria Vigano accusing the Vatican for not acting against the offenders.

Pennsylvania’s attorney general, Josh Shapiro told to a news channel that the Vatican knew about a cover-up involving sexual abuse and has evidence of the Vatican having knowledge of the same. However, he has not confirmed what exactly is the evidence that proves the Vatican was aware of the cover-up.

Hundreds of priests from six Pennsylvanian districts are reportedly involved in abusing children for last seven decades and these allegations have come forth, two weeks after the release of grand jury report.

There is a widespread cover-up revealed in the Grand Jury’s investigation report into abuse and another interesting fact which they have established is that of a systematic cover-up which went up till the Vatican. It is reported that the 23 grand jurors met for two years and “unearthed over 301 predator priests (and) more than a thousand victims — children in Pennsylvania,” Shapiro told “Today.”[1]

There are more than 730 calls received on Pennsylvania’s clergy abuse hotline since the grand jury report has been released. However, it is unclear that how many of these cases (if any) could still be prosecuted and the number of calls highlights the impact on victims who have suffered over the years.

The Archbishop Carlo Maria Vigano who served as the Vatican Ambassador to the United State from 2006 to 2011, has released an 11-page document on Sunday to Catholic Media group. In this letter, he has accused Pope Francis of ignoring sexual abuse accusation against former Cardinal McCarrick of the United State in June 2013. For all these years there was no action taken against him despite knowing his involvement in the sexual abuse case. It is only last month that McCarrick resigned after the evidence was released that he had molested an altar child.

After the apology by Pope on Sunday, Vigano wrote “Apology is not enough”, there must be action taken against people who covered up, irrespective of the position held and set a good example and ensure zero tolerance.

This letter which was released during Pope Francis’ visit to Dublin, Ireland, where he addressed the crowd (on Sunday 26th Aug 2018) and read out the letter from former Vatican official which calls for his resignation. However, he started his service by apologizing for the scandal and the betrayal felt by the victims.

The Pope also told reporters that, he would not say a single word about the contents of the letter and the letter speaks for itself. [2]

After the apology by Pope on Sunday, Vigano wrote “Apology is not enough”, there must be action taken against people who covered up, irrespective of the position held and set a good example and ensure zero tolerance.

With these allegations coming to light, Vatican office needs to come clean on the actions being taken by them on church leaders. Will the Pope himself take the moral responsibility and resign for not acting against all the priests’ who were involved in sexual abuse as well as priests who were covering up?

[1] AG Claims the vatican knew about cover up – CNN.com 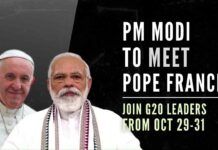 PM Modi to meet Pope Francis at Vatican. Will join G20 leaders in Rome from Oct 29-31 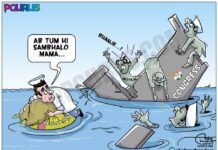