The Real Estate Regulator Bill, pending since 2013 with the realty regulator proposed in it, along with reforms will make Indian realty industry investor-friendly.

[dropcap color=”#008040″ boxed=”yes” boxed_radius=”8px” class=”” id=””]O[/dropcap]nce the Real Estate Regulator (Regulation and Development) Bill, pending since 2013 is passed, the realty regulator proposed in it, along with reforms, will empower and protect property buyers and investors, paving the way for more organised, fair, credible and transparent property transactions.

In this backdrop, real estate regulatory authority — cleared by the upper house of parliament and the main opposition, the Congress party, assuring support in the lower house — assumes significance. It seeks to check fraudulent practices and provide a fair deal to property buyers.

The consumer-friendly landmark legislation is aimed at setting up regulatory and redressal mechanism, the absence of which is responsible for the present mess in the real estate.

[dropcap color=”#008040″ boxed=”yes” boxed_radius=”8px” class=”” id=””]T[/dropcap]he key provisions of the legislation, which bring brokers along with developers under its ambit, include:

– Also required is completion schedule, with ban on pre-launch advertising without sanctions

– Provisioning of fair compensation for delays in delivery

[dropcap color=”#008040″ boxed=”yes” boxed_radius=”8px” class=”” id=””]T[/dropcap]hough this model legislation covers both residential and commercial real estate including ongoing projects, yet it’s the residential real estate which is going to get big boost , especially by boosting the confidence of home buyers.

Unlike in the past, now the home buyers can take informed decisions to invest with all the project information at their disposal which developers and brokers are now liable to disclose. In this context, it is worthwhile to mention single-most important factor responsible for keeping home buyers away thereby resulting in lukewarm sales.

It has been the sheer lack of safety of their investment, especially in view of extraordinarily long delays in project completion, with buyers money stuck for years without redressal. But now the watchdog will ensure timely completion with time-frame for completion and delivery of registered projects to be clearly mentioned and adhered to.

The mandatory project-specific escrow account will ensure that as much as 70 percent of the money collected by developer for certain project from buyers is not diverted elsewhere, thereby ensuring that project is not delayed due to fund crunch. The escrow mechanism will also guarantee security of the money invested by home buyers.

So, there will be no escalation of charges and the home buyer will not be liable to pay any charges other than the ones mentioned in the agreement. The provision of speedy and time-bound dispute redressal within two months is also a big confidence-booster for home buyers who are till now deprived of this and were forced to run from consumer courts to lower courts to higher courts for justice.

The regulatory authority is fully supported by the ongoing reforms in the real estate and housing sector, which will prove a big boon for affordable and low cost housing, in line with government’s flagship mission of “Housing for All”.

This year’s budget has addressed the affordability issue through a number of policy initiatives like 100 percent service tax exemption for affordable homes, and additional yearly rebate of Rs.50,000 on housing loan interest for first time home buyers in affordable segment with loans not exceeding Rs.35 lakh.

[dropcap color=”#008040″ boxed=”yes” boxed_radius=”8px” class=”” id=””]L[/dropcap]ack of sustained fund flow has been the biggest bane, restricting the supply, leading to housing shortage, particularly in mass housing. But now with a regulatory authority set to become a reality, it will pave way for industry status to housing, particularly affordable housing to facilitate cheap bank funding.

It may be mentioned that banks’ exposure to real estate in India is merely 3 percent, while it is 10 times in the US. The major policy decision in this year’s budget to boost reat estate investment trusts by abolishing dividend distribution tax will help developers raise funds for affordable housing, besides commercial real estate.

Faster approvals are a key to affordable housing as delayed sanctions result in cost over runs. Project sanction is a long and tedious process where developers need to seek over three dozen clearances for construction and completion. As such, there is an urgent need for simplifying and streamlining the process to fast track approvals.

Some states like Maharashtra, under its new housing policy, is working to speed up the approval process by reducing number of approvals and making it online.The Centre, as part of its reform policy of “ease of doing business”, needs to bring out a “model mechanism” to ensure faster approvals for other states to follow.

The provisions on the regulatory authority call for this — and an expert committee constituted by the housing ministry has come up with a reform blueprint in this regard to check large scale delivery defaults that not only add to the cost but also shake the confidence of property buyers and investors.

[dropcap color=”#008040″ boxed=”yes” boxed_radius=”8px” class=”” id=””]A[/dropcap] recent study by CB Richard Ellis says that the real estate sector can double its share in GDP to 13 percent with the aid of reforms. With urbanisation expected to grow at a compounded annual rate of 2 percent over the next two years, the regulator can be used as a tool to achieve double-digit growth with reforms like online and speedier projects sanctioning, simplified and rationalised taxation through goods and services tax, liberalised floor area and density norms to boost supply.

Once the central bill takes the shape of a legislation, states will have to come up with their own framework of regulatory authority. With its implementation, the watchdogs will wipe out the negative image associated with the fragmented, unregulated and opaque realty sector.

This, in turn, will make real estate an attractive asset class for domestic and foreign investors. But then, the key to its success lies in implementing it in letter and spirit so that it does not end up as another piece of legislation. 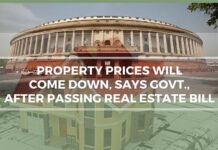