Blame game on within militant outfits ?

Ahead of the first anniversary of Surgical strikes carried out by the elite commandos of the Indian army deep inside Pakistani territory to dismantle ‘terror factories’ and safe heavens of militant outfits the joint team of security forces are on the roll across Kashmir valley.

Equipped with specific intelligence inputs these jawans have been successfully eliminating top commanders and minimising the potential threat to peace and security in the region.

In the last couple of weeks, the Indian security forces have created the fear psychosis in the minds of militant commanders by eliminating top commander in surgical operations.

In the absence of any top-ranking militant commander, the Pakistan based handlers are struggling to hand over the baton to some local militants as they feel they cannot even motivate their young cadre and continue the ‘jihad’ against the Indian armed forces across the state of Jammu and Kashmir.

On Tuesday when one of the longest surviving militant commanders of Hizbul Mujahideen Abdul Qayoom Najar was killed in a gunbattle with security forces near the Line of Control (LoC) in Uri sector in Baramulla it emerged he was returning to Kashmir to take over the command of Hizbul Mujahideen in the wake of elimination of top commanders of the outfit by security forces.

Najar was wanted for his alleged involvement in more than 50 killings, including that of four policemen in Hygam area of Sopore, in the past 17 years, Baramulla Senior Superintendent of Police (SSP) Imtiyaz Hussain said.

He was also involved in attacks on telecommunications towers across the valley in 2015, the SSP said.

As an IED expert, he was involved in a lot of IED explosions across different parts of Kashmir valley.

While he was trying to infiltrate into this side, he was also carrying IED material with him.

“So, it is a big success, big achievement, for all of us especially because had he been alive and had he successfully infiltrated into this side, it would have been a big problem for us. Neutralising him would have been very difficult as he was already heading a huge network in Sopore, Palhallan, Pattan, Handwara areas of Bandipora and Baramulla. We should be thankful to our Army,” the SSP said.

He said Najar had joined militancy after the killing of Hizbul Mujahideen commander Abdul Majid Dar in 2003.Dar was roped in by the Government of India to hold peace parleys but before dialogue could take place the militant commander was eliminated.

I heard no one was willing to become militant commander: DGP

Recently when security forces eliminated Lashkar-e-Taiba commander Abu Ismail, the mastermind behind Amarnath yatra strike DGP Dr SP Vaid, was quoted by ANI news agency has said that “nobody is willing to take that role. “What is there in a name? I have in fact heard that there is a vacancy of commander in Lashkar and nobody is willing to accept it”.

Ismail was the fourth top commander to be killed in South Kashmir since the security forces launched ‘Opeartion all-out’ to flush out the militants in the valley.

Fissures in the militant ranks?

If latest grapevine is to be believed militant outfits have started blame game over each other for allowing security forces to take the upper hand and consolidate their position in different parts of Kashmir valley.

This is evident from the fact that Hizb-ul-Mujahideen recently accused Zakir Musa, Al-Qaeda’s commander in South Kashmir of having “taken a great sum of money from the Indian government for engineering the martyrdom of important mujahideen”.

Hizb said, “Never in the past have so many mujahideen been martyred in so short a time. The man responsible for this is none other than Zakir Musa “

In a statement released online, Hizb said, “Never in the past have so many mujahideen been martyred in so short a time. The man responsible for this is none other than Zakir Musa (Zakir Bhat’s pseudonym). This traitor is trying to weaken the freedom movement. He has confused the public by calling himself a mujahid, whereas he is, in fact, an agent of India.”

Elimination of top commanders is a game changer?

Many security officials described the continuous killing of the top leaders in the valley as “game-changer in South Kashmir and a morale-booster for security forces.” Around 58 terrorists have been eliminated in South Kashmir in the last eight months. Over 140 militants have been killed in Jammu and Kashmir this year.

Major General B S Raju, General Officer Commanding, Victor Force, which is responsible for security in South Kashmir, said that the killing of Ismail would lead to a “serious leadership crisis in the Lashkar.” The other militant leaders killed by security forces under ‘Operation all-out’ are Sabzar Ahmad Bhat, Yasin Yattoo and Abu Dujana.

According to the latest assessment by the various agencies, there are around 229 active militants, both local and foreigner, security forces have managed to kill 143 of them, including at least eight top-ranking commanders like Abu Dujana and Yasin Yattu.

There is not a day when cordon and search operation is not conducted in any part of the region.

Raids on hideouts are a common feature and sometimes, especially in south Kashmir region, where 113 militants are operating. There is not a day when cordon and search operation is not conducted in any part of the region. Area domination has been enhanced to the extent that in Shopian district alone, six new Army camps have been established in recent months.

This state of affairs has instilled fear among the masses and militants have resorted to a reactionary tactic. Since January this year, 57 security persons have been killed in Kashmir, 26 of them constables and middle-rung officers of Jammu & Kashmir police. This is the highest number of police casualties in Kashmir during more than a decade.

High alert ahead of anniversary of Surgical strikes

The Indian army and Border security force jawans have been kept in a state of high alert to prevent any major strike by fidayeen groups(suicide squads) of militant outfits from across the line of control or the International border on any vital security installation.

On Tuesday the Indian army also thwarted a similar bid as a group of heavily armed intruders had come close to an Indian army post to demolish it.

According to sources, seven-eight armed intruders came close to an Indian Army post and were provided cover fire by a Pakistan Army post on the other side, which fired mortars and shells.

Sources said the aim of the intruders was to damage the post, but it was thwarted by the Indian Army.Presence of militants/infiltrators has been spotted along the line of control in Poonch and along the International border across Jammu frontier. 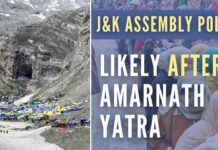