BJP MP Gautam Gambhir has alleged a death threat to him and his family from the terror group ISIS Kashmir in a police complaint filed in Delhi.

Security has been beefed up outside Gambhir’s residence, following the complaint filed by him. DCP central Shweta Chauhan informed that the investigation into the alleged death threats is underway

The BJP MP and former cricketer Gautam Gambhir have approached the Delhi Police on Wednesday, alleging he has received death threats from ISIS Kashmir.

Gambhir stated that he has received a threat email from the handle of ‘ISIS Kashmir’, which read, ‘We’re going to kill you and your family.’

He has urged the Delhi Police to provide adequate security and lodge an FIR into the matter.

The police will take further action after investigation, including the verification of the e-mail address from which the threat was sent to Gambhir. 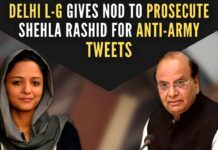 Escalation along the LoC: 7-8 Pak armymen killed in retaliatory firing