‘Collegium discussions can’t be put out in public domain through RTI‘, says SC

Dismissing a plea seeking to disclose details under the Right to Information (RTI) of a collegium meeting in which decisions were taken regarding the elevation of Judges to the apex court, the Supreme Court on Friday said that whatever was discussed in the collegium was not required to be put out in the public domain, that too under the RTI Act.

A bench headed by Justice M R Shah said, “Only a resolution drawn and signed by all the collegium members can be said to be the final decision…”

“Collegium is a multi-member body whose decision embodies into the resolution that may be formally drawn up and signed…,” said the bench, adding that only the final decision was required to be uploaded on the Supreme Court’s website.

The top court judgment came on a petition by activist Anjali Bhardwaj against the Delhi High Court order, which dismissed her plea seeking the apex court collegium’s agenda in connection with a meeting held on December 12, 2018, when certain decisions were purportedly taken on the elevation of some judges to the apex court.

On December 2, the Supreme Court, taking a dig at retired judges, said, “It has become a fashion for them to comment about earlier decisions taken by the collegium, and the existing collegium system should not be derailed on the basis of statements of some busybody”. The apex court emphasized that the collegium was the most transparent institution.

The bench said that it did not want to comment on what a few former apex court judges, who were once members of the Supreme Court Collegium, were now saying about the mechanism.

Advocate Prashant Bhushan, representing the petitioner RTI activist Anjali Bhardwaj, said Justice Madan Lokur, former apex court judge, who was part of the Supreme Court Collegium in 2018, had said that one of the decisions, should have been uploaded on the Supreme Court website.

The bench said, “Nowadays, it has become a fashion to comment upon earlier decisions (of the collegium) made when they (former judges) were part of the collegium”. It further added, “We don’t want to say anything about their comments”.

The Collegium, which was headed by then CJI Ranjan Gogoi and comprising four senior-most judges Justices Lokur, A K Sikri, S A Bobde, and N V Ramana took certain decisions regarding the appointment of judges. However, details were not uploaded on the website. In January 2019, the collegium revisited the decisions “in the light of additional materials”. 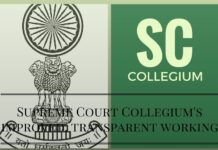 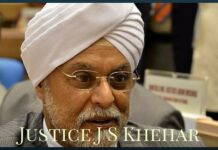 SIT to probe old cases against SP MLA in UP; flags...