Amid the row over the observations made by the judges of the Supreme Court in the Nupur Sharma case, 15 retired judges, 77 retired bureaucrats, and 25 retired armed forces officers issued an open statement against the “unfortunate and unprecedented” comments by Justice Surya Kant & Justice Pardiwala.

A group of former judges and bureaucrats on Tuesday criticized the recent Supreme Court observations against suspended BJP member Nupur Sharma, alleging that the apex court surpassed the “Laxman Rekha” and calling for “urgent rectification” steps.

An open letter has been sent to CJI NV Ramana, signed by 15 retired judges, 77 retd bureaucrats & 25 retd armed forces officers, against the observation made by Justices Surya Kant & JB Pardiwala while hearing Nupur Sharma’s case in the Supreme Court. pic.twitter.com/ul5c5PedWU

The statement signed by 15 former judges, 77 ex-all India services officers, and 25 veterans said, “In the annals of the judiciary, the unfortunate comments have no parallel and are indelible scar on the justice system of the largest democracy. Urgent rectification steps are called for as these have potentially serious consequences on democratic values and security of the country.”

“By no stretch, these observations, which are not part of the judicial order, can be sanctified on the plank of judicial propriety and fairness. Such outrageous transgressions are without parallel in the annals of Judiciary,” it said.

Criticizing the observations, the statement said, “We, as concerned citizens, do believe that democracy of any country will remain intact till all the institutions perform their duties as per the constitution. Recent comments by the two judges of the Supreme Court have surpassed the Laxman Rekha and compelled us to issue an open statement.”

These “unfortunate and unprecedented” comments have sent shockwaves in the country and outside, it claimed.

Noting that Sharma sought access to the justice system before the highest court, the statement said the court’s observations have no connected jurisprudentially with the issue raised in the petition and “transgressed in an unprecedented manner all canons of the dispensation of justice”.

“She was defacto denied access to judiciary and in the process, there was an outrage on the preamble, spirit, and essence of the Constitution of India,” it alleged.

In the observations, there is the virtual exoneration of the “dastardliest beheading at Udaipur in broad daylight,” it claimed.

It further said, “Legal fraternity is bound to be surprised and shocked at the observation that an FIR should lead to arrest. The observations on other agencies in the country, without notice to them, are indeed worrisome and alarming.”

The signatories also defended Sharma’s plea for clubbing all FIRs against her citing previous orders of the apex court.

“One fails to understand, why Nupur’s case is treated at a different pedestal. Such an approach of the Supreme Court deserves no applause and impacts the very sanctity and honour of the highest court of the land,” it said.

Refusing to entertain her plea for clubbing of FIRs lodged in various states against her for the remark, the Supreme Court had on July 1 come down heavily on Sharma for her controversial comments against Prophet Mohammad, saying her “loose tongue” has “set the entire country on fire” and that she is “single-handedly responsible for what is happening in the country”.

The bench held that the comment was made either for cheap publicity, political agenda, or some nefarious activities. It said, “What has happened in the investigation so far? What has Delhi Police done so far? Don’t make us open our mouths? They must have put a red carpet for you.” 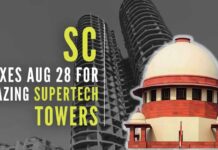