Suvendu Adhikari, West Bengal’s Leader of Opposition wrote a letter to Union Home Minister Amit Shah and WB Governor La Ganesan demanding the deployment of central forces in the state in the wake of the Mominpur violence. Adhikari also claimed that some miscreants have taken over the Ekbalpur Police Station.

In the letter, Adhikari mentions that the CRPF will ensure that the spark can be extinguished before it turns into a wildfire. Adhikari mentioned that Mamata Banerjee-led government is unable to control law and order.

Posting the letter on his Twitter handle, Adhikari said, “I have written to Hon’ble Union Home Minister Shri Amit Shah Ji & Hon’ble Governor Shri La Ganesan Ji requesting them to urgently deploy Central Forces in the wake of Mominpur violence & ransacking of Ekbalpur Police Station before the Law & Order situation of WB gets out of hand.”

I have written to Hon’ble Union Home Minister Shri @AmitShah Ji & Hon’ble Governor Shri La Ganesan Ji requesting them to urgently deploy Central Forces in the wake of Mominpur violence & ransacking of Ekbalpur Police Station before the Law & Order situation of WB gets out of hand pic.twitter.com/yr3lB1MaJB

He further wrote, “The Hindu community has come under attack in the Khirdipore Mominpur area of Kolkata on the eve of Lakshmi Puja. Many shops and bikes belonging to Hindus have been vandalized by hooligans and anti-social. The onslaught has similarities to the Panchla violence which happened in June in the Uluberia area of the Howrah district. At that time, the violence spread across West Bengal, especially in the Nadia and Murshidabad districts.”

He added, “I apprehend that, as the West Bengal government is reluctant to act against the perpetrators this time as well because they belong to a certain community, this time too this may flare up and start to spread across the state resulting in loss of lives and property; both public and private. The state government has already meekly surrendered in front of the wrath of the goons who have taken over the Ekbalpur Police Station. If morning shows the day, then the day definitely is gloomy.” 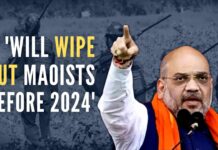