The Delhi High Court today posted for further hearing to August 4, 2016 Dr. Subramanian Swamy’s Petition seeking a retrial in the Hashimpura {Meerut} extra-judicial killing of 42 Muslim youth on May 22-23, 1987 by a 19- strong platoon of the UP Provincial Armed Constabulary[PAC].

The Trial Court in Tis Hazari Delhi had acquitted all the PAC jawans accused but passed strictures on the shoddy investigation and prosecution that left the Court no alternative but to acquit the Accused. The Trial Court judge observed that it was sad that justice could not be given to the innocent obviously killed by a state agency.

The incident came to public notice when Dr. Swamy went on a fast unto death in August 1987 at the Boat Club at Rajpath New Delhi demanding a judicial inquiry, which demand was conceded on the seventh day of the fast by the then Prime Minister Rajiv Gandhi. Dr. Swamy broke his fast after the Janata Party MP Syed Shahabuddin intervened. Subsequent inquiry by The Gian Prakash Commission established the allegations made about the genocide by Dr. Swamy. A criminal prosecution was then launched and the Trial Court judgment was delivered in 2013.

Dr. Swamy’s main submission in his Petition is that the PAC was ordered by the then Minister of State for Home Mr. P.Chidambaram to carry out the genocide. Dr. Swamy produced an admission by Mr. Chidambaram on the floor of Rajya Sabha that he stayed for the night of May 19, 1987 in the Hashimpura area and had held meetings of UP Government officials. These officials were never questioned by the Prosecution. Dr. Swamy has also alleged that Mr. Chidambaram returned on May 23, 1987 to review and ensure destruction of evidence.

Hence Dr. Swamy has prayed to the High Court for a re-trial and interrogation of Mr Chidambaram. Today the UP Government Advocate General was present and he informed the court that the UP government supports Dr. Swamy’s Petition. 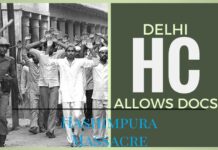