Post completion of the second phase works, corridor will be transformed into “Shri Mahakal Mahalok”

Soon after Prime Minister Narendra Modi inaugurated and dedicated the ‘Mahakal Lok’ to the nation, the work commenced for the second phase of the corridor in Madhya Pradesh’s Ujjain city.

The second phase of work includes the renovation of ancient temples and heritage structures and the restoration of the Chhota Rudra Sagar lake, Madhya Pradesh Chief Minister Shivraj Singh Chouhan has said.

After the completion of the second phase works, it will be transformed into “Shri Mahakal Mahalok“, Chouhan said in Ujjain on Tuesday.

Prime Minister Narendra Modi had last week dedicated to the nation the first phase of the ‘Shri Mahakal Lok’ corridor constructed at an estimated cost of Rs.351 crore.

“The work on the second phase of ‘Shri Mahakal Lok’ has started, including the development of shikhar darshan, meditation room, restoration of Chhota Rudra Sagar, renovation of ancient temples and heritage Dharamshala,” Chouhan said.

Earlier, he inspected the work of the second phase of Ujjain’s Mahakaleshwar redevelopment project and felicitated workers and artisans involved in the construction of the Mahakal Lok corridor.

Chouhan said he will send the ‘prasad’ of Mahakal temple with a letter to important dignitaries in the country, including governors, chief ministers, and Union ministers, and invite them to visit the Mahakal Lok.

The Chief Minister also laid the foundation stone of Meghdoot Upvan to be developed on a seven-acre land at an estimated cost of Rs.11.36 crore under the second phase of the Mahakal Lok project. The administration acquired land worth Rs.69 crore for this project by removing encroachments and demolishing 187 shops and gardens constructed by land mafias, he said.

The smart city department will develop a city forest on the land, with a parking facility for 650 vehicles with charging stations, walking tracks, sitting areas, cafeteria, and carry out beautification of the riverside, Chouhan said. 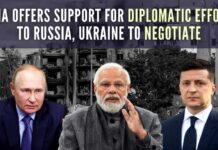 Why medical education in vernacular languages may be a good idea