The present foreign controlled owners & management are responsible for Jet Airways mess as they did not build up a reserve when the fuel prices were low.

Jet Airways had informed lenders it would raise about Rs 3,500 crore over the next six months through a stake sale in its loyalty programme and infusion of fresh funds.

Jet Airways has recently defaulted on the rental payments on its leased aircraft. The airline has been served a notice by the Airport Authority of India and the aircraft lessors over the delay in payments.

A survey operation, by 50 tax officials, has taken place under Section 133A of the I-T Act at the airline’s four premises, including Andheri and Nariman Point, in Mumbai and Connaught Place in Delhi. Meanwhile, the tax department is also examining the airline’s deal with Godrej Buildcon, where Jet is said to have received Rs 17.25 billion as monetary consideration. This matter pertains to an agreement between Jet and Godrej in 2011, where they had planned to develop the airline’s 2.5-acre property at the Bandra Kurla Complex in Mumbai. The I-T department has also considered the goods and services tax council’s probe finding, which had issued an adjudication order and raised a service tax demand of Rs 2.37 billion on Jet in March.

Jet Airways’ ownership was always mired in controversy, investment reportedly came from Isle of man. However, it has been in the spotlight since August 9, after it had deferred its quarterly results amid differences with its auditors, leading to queries by stock exchanges and the market regulator. The auditor did not modify its opinion and reiterated that the airline’s future was dependent on raising capital and generating sustainable cash flows. Jet Airways reported a net loss of Rs 13.26 billion in the April-June quarter of 2018-19.

Mint reported on 10 October that private equity (PE) giants Blackstone Group LP and TPG Capital, which are eyeing a stake in Jet Privilege Pvt. Ltd (the loyalty programme of Jet Airways), are having second thoughts due to worries over the airline’s financial health.

Mint reported that while both PE firms had already offered indicative term sheets valuing Jet Privilege at close to $900 million, they decided to wait to see how well Jet manages to run its overall operations in the months ahead. Mint reported on 28 September that Jet Airways had informed lenders it would raise about Rs 3,500 crore over the next six months through a stake sale in its loyalty programme and infusion of fresh funds. The airline also told lenders that it would shave off costs by Rs 2,000 crore over the next two years.

The weakening rupee and rising oil prices are not the only factors weighing on the domestic carriers, the intense competition has also led to a price war in the sector.

This would, however, be subject to the strengthening of the rupee against the dollar and a fall in crude oil prices, which, analysts said, were unlikely in the near term.

ATF prices have risen 38 per cent from Rs 50,200 per kilolitre (KL) in September last year to Rs 69,090 per KL in August 2018. This has dented the margins of several airlines and put pressure on yields – the average fare paid per mile, per passenger.
Despite 50 consecutive months of double-digit passenger traffic growth, Indian carriers are yet to pass on the burden of rising aviation turbine fuel (ATF) prices to flyers. The issue is that India is a price-sensitive market. Despite demand being high, the industry currently lacks the pricing power. The weakening rupee and rising oil prices are not the only factors weighing on the domestic carriers, the intense competition has also led to a price war in the sector.

While there are ample reasons for travellers to rejoice the giveaway fares offered by low-cost as well as full-service carriers, the widening losses due to escalating costs have severely affected the ability of domestic airlines to weather the storm. Even Indigo has recently made a loss.

On 18th Nov. 2011, in governancenow.com, I had held and written ‘Mallya responsible for Kingfisher mess’ and subsequently Kingfisher airline went off operation. Now for Jet Airways mess, obviously, the present foreign controlled owners and management are responsible for they did not or could not build up a reserve when the fuel prices were low for meeting contingencies such as it is now. Therefore hopefully they will relinquish management control and sell off their controlling holdings in favour of an interested professional and cash-rich group at a proper valuation well before the situation becomes hopeless. 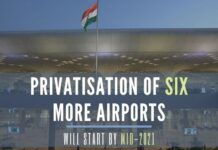 C-Company – How Chidambaram made his fortune using Babus, Bankers and...