Who are they? The Hindus’ constant fight for the reclamation of the Janmabhoomi of their Shri Ram, for centuries, is etched in our collective Hindu consciousness. The 6 December 1992 Kar Seva endeavour was a definitive step toward such effect. In retaliation to it and to dispirit the Hindus and thereby constrain the Hindu uprising, a bomb blast was carried out by the Islamic terrorists, one of occupying foreign forces still nagging Bharat.

Yes. On 8 August 1993, a bomb blast was carried out in the RSS (Rashtriya Swayamsevak Sangh) office at Chetpet, Chennai. The aforementioned 11 Hindus were killed in the blast.

What does this tragic incident tell us?

The occupying foreign forces will go to any extent to thwart the organization, camaraderie, and reclamation of usurped rights of Hindus i.e. the children of Bharat; and they will not even hesitate to commit genocide against the said children of Bharat in order to realize their expansionist objectives.

This is war! A continuing war, spanning across generations, between the occupying foreign forces and the indigenous people of Bharat.

The children of Bharat i.e. Hindus will win this continuing war because, while the occupying foreign forces are trying to vanquish the Hindus in order to expand their religious faiths and ideologies, the Hindus, on the other hand, are fighting the said enemy forces to save their motherland, civilizational values, and Hindu lifestyle. Therefore, this is an existential fight for the Hindus, whereas, to the occupying foreign forces, it is just a fight for power and expansion.

The then Chief Minister of Tamil Nadu J Jayalalithaa and her government came forward to financially support rebuilding the large portion of the RSS office building that collapsed in the bomb blast. But the RSS declined her offer and rebounded like a phoenix bird and rebuilt the collapsed structure in just one year. 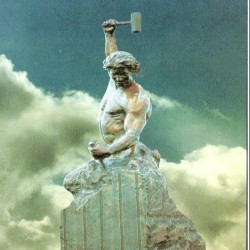 Shriram
Shriram, a swayamsevak in a mission of Nation-building to contribute to the realization of more prosperous Bharat. Also a law aspirant currently.

Latest posts by Shriram (see all) The trained TV Jihadis’ vs the nincompoops