Fake liquor seized by UP STF in UP’s Baghpat

The Uttar Pradesh State Police Special Task Force had a huge success in seizing a truck full of fake liquor, meant to be distributed ahead of the upcoming Assembly election. The liquor was seized in Uttar Pradesh’s Baghpat and five persons were arrested, officials said.

As many as 820 boxes of liquor, and the truck, as well as a car, five cell phones, and 75 sacks of puffed rice, were seized.

Earlier, a special drive was carried out in districts such as Bijnor, Moradabad, Rampur, Amroha, and Bareilly as part of directives issued by Additional Director General of Police, Bareilly Zone. The drive comes ahead of Assembly elections in UP

A senior police official said that the accused were identified as Pawan, Sachin, Udham, Deepak, and Amit.

The officials said, “They told us that due to Assembly elections, the demand for the liquor has gone up and they were supplying fake liquor after putting original labels on the bottles to earn huge profits.”

On the modus operandi, the accused had made a special iron net, put the boxes of liquor below it, and covered the net with sacks of puffed rice and fodder.

The official said that soon after the announcement of Assembly elections the police were given instructions to put a tight vigil to prevent inter-state liquor smuggling. The police had also launched a special drive to nab all the wanted and notorious criminals of UP.

The Meerut unit of STF got specific input about the liquor smuggling from nearby states. This information was developed and a team was set up to bust it.

The team got to know that the liquor was being brought from Haryana and was about to be supplied in Baghpat and nearby areas.

The team got a tip-off that the accused persons would be coming to Pilana village by truck, laid a trap at Baghpat-Meerut road near Pilana T point, and arrested the accused.

The accused told the police that they took the supply from Haryana’s Sonipat area and it was meant to be delivered at the office of Sunil Bhagat in Baghpat.

The UP Police had earlier busted 120 illegal distilleries, seized 18,589 liters of spurious liquor, and arrested 714 people. 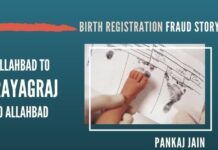 Allahabad to Prayagraj to Allahabad