The parliamentarian who vainly tried to discredit Sardar Patel had either not read Rajmohan Gandhi’s biography in full or had played mischief by selectively quoting from it.

During the course of discussions on Jammu & Kashmir in the recently concluded session of Parliament, an opposition member claimed that Sardar Vallabhbhai Patel wanted to give Jammu & Kashmir to Pakistan. He was perhaps referring to a passage in Patel: A Life, a biography of the Sardar written by Rajmohan Gandhi. The author had written: “Evidently, Patel even said that ‘if the Ruler felt that his and his State’s interest lay in accession to Pakistan, he would not stand in his way’”. Rajmohan Gandhi had further said, “(VP) Menon’s admission, in respect of the period before October 1947, that ‘if truth be told, I (Patel) for one had simply no time to think of Kashmir’, strongly confirms the impression of Vallabhbhai’s passivity at this juncture regarding Kashmir.”

Those who use this passage to establish that Sardar Patel favoured Jammu & Kashmir’s accession to Pakistan, grossly miss the Iron Man’s shrewdness. He knew that eventually Maharaja Hari Singh, the ruler, would opt for India, though the king was still gripped by a long bout of prevarication at that point. By lobbing the ball in Hari Singh’s court, Sardar Patel had seized the moral high ground for India without the threat of any possible loss.

Rajmohan Gandhi wrote, using a chess analogy — which the Member of Parliament who sought to ‘expose’ Patel over Kashmir, conveniently did not mention in his speech — that “Junagadh was a pawn with which Jinnah hoped to get the Queen” — and Kashmir was the Queen.

And, when Patel said he had no time to think of Kashmir, it was for a reason — and that was the trouble brewing in Junagadh. Over 80 per cent of Junagadh was then Hindu but was ruled by a Muslim, Nawab Mahabat Khan. He was inclined towards India but a palace coup thwarted his plans. Shah Nawaz Bhutto of the Muslim League became the Dewan of Junagadh. Bhutto was in close touch with MA Jinnah, and soon after Pakistan came into being, he announced Junagadh’s accession to the new country. Alarm bells rang in India and Sardar Patel swung into action once Pakistan, after some delay, declared its acceptance of the accession. Rajmohan Gandhi wrote, using a chess analogy — which the Member of Parliament who sought to ‘expose’ Patel over Kashmir, conveniently did not mention in his speech — that “Junagadh was a pawn with which Jinnah hoped to get the Queen” — and Kashmir was the Queen.

Had the opposition MP quoted Rajmohan Gandhi fully, it could have led to some embarrassment to the Congress ranks. For, the author said, “The implication was plain, yet… Nehru told Liaquat (Ali Khan) in Mountbatten’s presence that while India objected to the Nawab’s accession, it would always be willing to abide by the verdict of a general election, plebiscite or referendum in Junagadh.” Mountbatten then added his own bit, assuring that Nehru could also apply the same principle to other States. Rajmohan Gandhi quoted a source who wrote that “Liaquat Ali Khan’s eyes sparkled. There is no doubt that both of them (Nehru and he) were thinking of Kashmir.” It’s important to mention here that Rajmohan Gandhi unambiguously asserted in his book that “Patel would not have volunteered such a commitment”. In fact, Sardar Patel had made it known that a plebiscite in Kashmir would be conditional on one in Hyderabad”. Here again, Patel had demonstrated deftness. Jinnah refused the Hyderabad offer, knowing well its result. That should have been an end to the Muslim League’s demand for a plebiscite in Kashmir, but Nehru played his cards all wrong thereafter.

Meanwhile, Patel had his way in Junagadh. He had not only objected to the offer of a plebiscite but also opposed a message that was sought to be sent to Pakistan by the Indian government stating that the latter accepted the accession in principle but would like to ascertain the wishes of the people before finally approving it. He relented only on the condition that the Indian message would not contain anything that could be interpreted as friendly or conciliatory. Nonetheless, on his coaxing, Indian forces entered Junagadh and disarmed the princely State’s armed forces. Bhutto had left Junagadh for Karachi just in time, having seen the writing on the wall.

The opposition Member of Parliament, while seeking to undermine Sardar Patel’s stature over the Kashmir issue, should have quoted a few other passages from Rajmohan Gandhi’s book. For example, Rajmohan Gandhi wrote that Patel’s lukewarm approach to Kashmir changed after Junagadh declared its accession to Pakistan. “If Jinnah could take hold of a Hindu-majority State with a Muslim ruler, why should the Sardar not be interested in a Muslim-majority state with a Hindu ruler? From that day, Junagadh and Kashmir, the pawn and the Queen, became his simultaneous concerns. He would wrest the one and defend the other.” The Sardar did not let the grass grow under his feet once he had decided to act. Rajmohan Gandhi wrote, “At Patel’s initiative, planes were diverted to the Delhi-Srinagar route and wireless and telegraph equipment to both ends of the Amritsar-Jammu link. Telephone and telegraph lines were laid between Pathankot and Jammu.” The infrastructure was needed for quick responses in the region.

Once Jammu & Kashmir was attacked by invaders from Pakistan, Maharaja Hari Singh send an SOS to New Delhi. The Defence Committee had to decide on that appeal. When the committee’s Chairman Mountbatten wondered whether it would be prudent to send Indian forces into a state that had not acceded to India, Patel asserted that nothing prevented India from doing so. It was then that a quantity of arms from India went to Jammu & Kashmir; Patel’s trusted aide VP Menon also flew into Srinagar. Rajmohan Gandhi wrote — again, which was not referred to by the Member of Parliament in his recent speech — that, when a member of the Maharaja’s team (the Premier of Kashmir) threatened to approach Pakistan in case India did not help, Nehru angrily asked him to ‘go away’; as the Premier got up, Patel stopped him with the chilling words: “Of course, you are not going to Pakistan.” It was Patel’s firmness that led Nehru to shed his indecisiveness on the issue.

It is evident from the above-quoted passages that Sardar Patel, having come out of his initial reluctance, took charge of Kashmir affairs with his characteristic no-nonsense attitude. Had he continued to exercise his authority, the story of Jammu & Kashmir would have been very different in the decades to come. Unfortunately, not only had Nehru begun to take a direct interest in the matter, but he had also sidelined the Sardar in the process. In his book, Rajmohan Gandhi referred to a letter Nehru wrote to Maharaja Hari Singh (which signalled an end to Patel’s authority and establishment of Nehru’s hegemony on the issue). In the letter, the Indian Prime Minister asked the Maharaja to become a constitutional head, let Sheikh Abdullah become Jammu & Kashmir’s Prime Minister, and allow him (Abdullah) to form a government. Rajmohan Gandhi stated, “Viewing Abdullah as the key to Kashmir’s future and believing that Patel would mishandle him, Jawaharlal decided to manage Kashmir himself. The Sardar stepped aside the moment Jawaharlal expressed his wish to stand in his place.” Clearly, Nehru had more faith in the shifty Abdullah than the solid Sardar Patel.

In sum, the honourable parliamentarian who vainly tried to discredit Sardar Patel by resorting to quoting from Rajmohan Gandhi’s biography of the Iron Man of India had either not read the book in full or had played mischief by selectively quoting from it, and that too out of context. 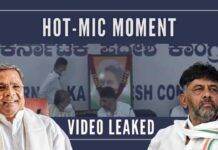