Few hours after the Centre banned 118 Chinese Apps, on Thursday early morning, Prime Minister Narendra Modi’s personal website narendramodi.in’s Twitter account was found hacked. The cyber agencies are probing the people behind this hacking. The hacking happened at 3:06 am with a series of messages to donate to Prime Minister’s National Relief Fund through crypt currencies like Bitcoins and the cyber team has restored the account in an hour by 4 am.

In some Tweets, the hacker identified him as ‘Jhon Wick. “Yes this account is hacked by John Wick,” one tweet said, in an apparent reference to the action movie character played by Keanu Reeves. “I appeal to you all to donate generously to PM National Relief Fund for Covid-19, Now India begin with cryptocurrency,” another tweet read. The Twitter account narendramodi.in is having 2.5 million followers linked to Modi’s account and PMO account with a lot of articles and details of Prime Minister and PMO’s meetings from 2014.

Around 12 minutes up to 3:16 am hackers posted series messages linking to bitcoin scam sites asking to donate to PM National Relief Fund for Covid-19 relief operations. It is interesting that the hackers quoted PM National Relief Fund while the Covid-19 relief donations were received in the newly created controversial PM Cares Fund. Many opposition parties objected the creation of PM Cares Fund and argued that why created a new fund while PM National Cares Fund is already in existence. Cyber agencies are also looking into this angle and involvement of Indian suspects and their connivance with foreign hackers. According to cyber investigation agencies, attackers might belong to Chinese hacking teams spread across the globe. “Obviously hackers are from outside India. We are trying to zero in the hacker’s point,” said investigators, who are coordinating with the Twitter Head Quarters in the US. Meanwhile, Twitter and cyber agencies are also looking at whether the hackers attempted Modi’s other Twitter accounts – Personal and PMO accounts – and ended in hacking personal website’s Twitter account.

“We are actively investigating the situation,” a Twitter spokesperson said. In July also Twitter’s famous accounts belong to Barack Obama, Joe Biden, Elon Musk, Jeff Bezos and Bill Gates faced hacking threats. Twitter clarified that the July attempters are not behind on Thursday’s hacking of Modi’s website’s Twitter account. “This time links were given on bitcoin scam-related links. So the probe is also concentrating this angle,” said cyber experts. 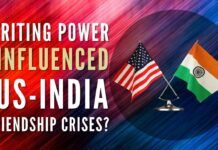 How people’s writing power may have influenced the U.S.-India Friendship during times of crisis?