Hijab controversy – Creating an issue out of no issue

While, for the last several decades, a section of Muslim women in India have been wearing burkha (covering themselves except the face) and hijab (a piece of cloth covering the head and neck), the fact is that section of Muslim women, particularly belonging to the middle and upper-income group and those reasonably well educated and employed, have not been using this attire.

In other words, most of the Muslim women wearing burkha and hijab belong to lower-income groups, who could not avail themselves adequate educational opportunities. Whether they like it or not, these women simply obey the dictates of Muslim clergy and male Muslim members, possibly fearing violence and harassment if they would not obey the dictates.

Of course, there could also be a section of Muslim women who believe that burkha and hijab are necessary, as per the religious practice, and feel comfortable with such attire.

In any case, there have been practically no issues in India with regard to Muslim women having burkha and hijab for the last several decades.

Why is it that Muslim girl students wearing hijab have suddenly become an issue today in India?

On careful study, it would become amply clear that there are deep-rooted reasons for this.

It is reported that amongst India’s population, around 79% is constituted by Hindus, around 14.6% (around 209 million) by Muslims, and the remaining by other religions such as Christians, Sikhs, and so on at present. Against this, in the year 1961, the Muslim population was 10.7% and that of Hindus 83.4 % in the total Indian population.

Muslim population in India is steadily increasing over the last several decades. According to the census of India, the Islam population rises by 3 to 5 million annually based on their past growth figures.

While Islam entered India by the 12th century and Christianity entered a few centuries later, the fact is that the population of both these religions has been steadily increasing in India. Such an increase in population has largely happened at the cost of the Hindu population.

There were religions like Buddhism, Jainism in India centuries back but the population percentage of these religions in India now has become miniscule and negligible. There is genuine apprehension amongst Hindus in India that the Hindu religion may also go in the same way as Buddhism and Jainism in the course of time. If the Muslim population and Christian population would steadily increase more than the growth rate of the Hindu population, there is certainly logic for this apprehension.

In the case of Islam, the Muslim population has been increasing mainly by births, particularly since Muslim men are allowed to marry several women and Muslim families are large in size and encouraged to do so. However, there is not many conversions of Hindus to Muslims and Christians to Muslims.

In the case of Christianity, the population has not been increasing significantly by births but only by conversion. Many Hindus have been converted to Christianity in the past which is still continuing, largely by enticing the poor Hindus with some benefits, gifts, and other strategies.

What is disturbing the Hindus is that both Christianity and Islam adopt aggressive approaches to expand their population. Both these religions are known to get support by way of money and other means from international sources. Muslims and Christians are not concealing their objective of increasing their population.

The ongoing hijab controversy is viewed all over India as an aggressive strategy of Islamic extremists to promote the Islamic way of life and further strengthen their religious base in India. Hijab’s insistence by the Muslim clergy is an indication of a sign and signal of the shape of things to come, now by creating an issue out of no issue.

All schools in India have prescribed uniforms for students. While a few schools may have insisted that Muslim girls should not wear the hijab while attending classes as a part of school dress discipline, there are thousands of schools in India managed by Hindus, Christians, Muslims, and government, where there is no restriction on the use of hijab by Muslim girl students. Then, why take a few isolated cases and launch big agitation creating religious conflicts? If necessary, the Muslim girl students have the option of going to some other schools, that permit the wearing of the hijab.

While a section of Muslims want the hijab culture to spread among Muslim women as a strategy for promoting Islamic culture and expanding Islam base, a section of those belonging to other religions wants to resist such approach, as a strategy to check the aggressive insistence on Islamic way of life and population expansion strategy of Muslims.

The recent demand for a ban on conversion by leaders of the Hindu community is due to the fact that Christian religious leaders are trying to aggressively convert Hindus to Christianity and they have succeeded in several instances.

In all probability, all religious conflicts in India will end, if the religious leaders belonging to Islam and Christianity will give up their goal and objective to spread the population of their religions in India.

The symbolic protest against the agitation that Muslim girls should be allowed to wear hijab in classrooms is only due to the fear that Muslim clergy are furthering the cause of spreading Islam and in the process expanding the Muslim population, when the Hindu population will severely shrink in the total population of the country in the next few centuries, as it happened to both Buddhism and Jainism. Obviously, many Hindus think that the population expansion plan of Islam and consequently Hindus losing their share in the Indian population, need to be checked effectively.

The ball is clearly in the court of Islam and Christianity to ensure religious harmony in India, as Hindus do not have the practice of poaching the population of other religions.

In any country, the maintenance of demographic balance over the length of time is vitally necessary to ensure social harmony and peace. 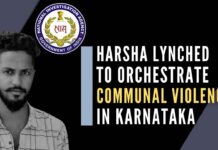 Rana, Riot and Rona – A misplaced sense of entitlement with no basis or facts