[dropcap color=”#008040″ boxed=”yes” boxed_radius=”8px” class=”” id=””]I[/dropcap]f there is any politician who should be ashamed of himself it is Arvind Kejriwal. Anna Hazare delivered a tight slap across his face on Dec 23, 2016, when he wrote to him for “shattering” his dreams. Anna is justifiably furious with the Delhi CM for deleting the names of donors from the AAP website. A U.S.-based AAP activist Mr Raizada is even sitting on a dharna at Jantar Mantar to protest the deletion. What has Kejriwal, a man who talked about transparency, to hide? His party submitted different lists of donors to the Income Tax Dept and the Election Commission thinking nobody will catch it. But, alert officials and citizens caught Kejriwal with his cotton pants down. Apparently there is a discrepancy of Rs.14 crores ($2.06 million) to Rs.18 crores ($2.65 million) between the two lists. Earlier, mysterious donations of about Rs.2 cr. ($300,000) were detected and the party had no credible explanation.

He will join the long list of politicians who have fallen on the roadside because of their actions.

Kejriwal has come full circle. He has turned out to be just like any other politician; crude, calculating n compromising. He thinks he can brazen out the current controversy also. But, he is sadly mistaken if he thinks that he can shake Anna off his back.
Until recently he had pursued a use-n-throw policy and got away with it. Witness the way he used Yogendra Yadav n Prashant Bhushan and countless other activists for his benefit and kicked them out when they started asking inconvenient questions. But Anna is made of different mettle. Despite his advanced age Anna still has lot of spunk left in him and more importantly his credibility is in tact. In his arrogance Kejriwal has fielded a small time functionary to counter Anna. But he doesn’t realise that Anna may well prove to be his nemesis.

When Mr. Bajaj, a one-time close associate, made damning disclosures about Kejriwal’s alleged links with a woman activist whom he has rewarded for services rendered (this was exposed in PGurus website) the CM thought the controversy would die a natural death if he did not react.

However, this time around he will have to face the music being played by Anna. He will join the long list of politicians who have fallen on the roadside because of their actions. But, the tragedy is that Kejriwal burst on the political scene promising to rescue the nation from the venality, duplicity and immoral conduct of politicians and eventually he has turned out to be one himself; ever ready to do anything for power.
Note:
1. Text in Blue points to additional data on the topic.
2. The views expressed here are those of the author and do not necessarily represent or reflect the views of PGurus.
3. The conversion rate used in this article is 1 USD = 67.95 Rupees. 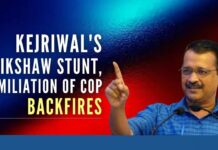