As the Union Budget for 2023 was prepared by the Nirmala Sitharaman‘s team, PM Modi had eight meetings with the team. The Budget team has been burning the midnight oil to get the i’s dotted and t‘s crossed.

Narendra Modi is a hard taskmaster. He does not allow even a paragraph of the Nirmala Budget speech to go off focus.

Just back from medical treatment, Nirmala Sitharaman has the stamina to stand to the demands of her boss Modi. In a day, she is glued to her iPad or computer for up to 18 hours. Like a frog in the well, she cut herself off from the latest news, whether it be the Jodo Yatra or the Jodi Yatra. The Finance Minister does not follow her WhatsApp chats. On the domestic front, her daughter is engaged now. Right after the Budget presentation, Nirmala has to fulfill her commitments to World Bank and International Monetary Fund meetings in March and April. Her calendar is full till May 2023.

The PM has a full plate too

But Narendra Modi has much more on his plate. Modi has to oversee the G20 and take political decisions for the BJP national executive committee meeting to be held in New Delhi from Jan 17-18. In between R N Ravi Governor walking out, K Chandrasekhar Rao is going to launch his BRS in Agartala!

Sops to the middle class

Finally, the voice of the middle class is being heard by this administration. A decision was taken early on to make the 2023 Union Budget to be middle class-oriented. Modi is concerned with the salaried class. Obviously, the first relief would be to tweak the income tax rates to make them more middle-class-friendly.

But a major concern for the government is cryptocurrencies domination in the world economy. Modi has a Ukraine-type of solution for crypto. This is likely to be revealed in Finance Minister Nirmala Sitharaman’s speech on February 1, 2023.

Since 2017–18, the tax rates have not been subject to review. Despite the introduction of a new tax system, the majority of taxpayers have not adopted it since it is less viable than the previous system. Therefore, the highest tax rate of 30% needs to be cut to 25% and the threshold for the highest tax rate needs to be raised from Rs.10 lakhs to Rs.20 lakhs to improve purchasing power and provide some tax relief.

Nirmala Sitharaman hails from Madurai and speaks Tamil, Telugu, and Kannada languages, and can follow Malayalam if it is spoken slowly. Nirmala Sitharaman will be springing a surprise by opening her 2023 Budget speech in Tamil.

T V Somanathan, the Union Finance Secretary is a Tamil. Ashish Vachchani, the Additional Secretary of Union Budget is a Tamil Nadu IAS cadre who too speaks fluent Tamil. These three are the dream team of Modi Budget. During the meetings, it is rumored that they converse in Tamil. The team has selected 4 important Tamil quotes from Agananooru, Purananooru, and Silappathikaram. These are relevant quotes Nirmala Sitharaman may read out.

So far 6 high-level meetings have taken place at Prime Minister Residence 7 Lok Kalyan Marg. Union Budget papers and documents have already been punched into the master computers officers in total are to guard the secrets.

Narendra Modi’s Budget is to focus on how to cheer up the middle class. Tax relief, women getting more share, and a novel idea of exemption for women if a second property is purchased in the woman’s name are believed to be some of the initiatives.

What are the 5 departments under the Ministry of Finance?

Who is a confidant of Finance Minister Nirmala Sitharaman? And Tamil fragrance!

Interestingly the Additional Secretary Budget is a Tamil Nadu cadre IAS officer Ashish Vachhani. Many times the Tamil fragrance is felt in a few meetings if Nirmala Sitharaman takes it in her chambers in North Block.

Since the merger of the Railway Budget with the Union Budget in 2017-18, the information in the expenditure profile also includes a detailed analysis of the Ministry of Railways.

The statements contained in Budget 2023 documents are prepared on the basis of inputs given by ministries and departments.

Also, the concentration is on Health care and Education.

To preserve budgetary secrecy, a huge security cordon has been thrown around the North Block.

Each entry point is guarded by CRPF with closed-circuit cameras and frisking.

Entry of media persons is strictly banned. Corporate Houses Liaison officials are also stopped at the main gate. Round-the-clock vigil is kept in the corridors of the Finance Minister which is situated on the first floor.

Computers are under constant surveillance by the IB sleuths. All internet connections are disconnected- and any browsing activity is registered in the log book. Pen drives and Bluetooth devices are not permitted into the North Block.

To identify any external substance materials smuggled into the North Block scanners are kept at the four entry and exit points, manned by the Intelligence Bureau. Mobile phone jammers are also installed to prevent any cell phone-based conversations.

Where, when, and how is the Budget printed?

Budget papers running into hundreds of pages are printed at Government Press situated under the North Block, an underground printing press. Due to the digital Budget introduced by Narendra Modi the printing of the Union Budget papers is much reduced to 1000 copies. Members of Parliament are given e-Budget copies. It is uploaded to the websites and app as soon as Nirmala Sitharaman completes her speech.

DATA SECURITY. Union Budget is the top priority and categorized as Grade One protection by the secret wing of the Intelligence Bureau. If any leak takes place the stability of the government will be in crisis. Hence several angles security measures are adopted.

IB has posted three senior officials at the printing press where the Budget is printed.

With top secrecy, the printing press employees too cannot decipher what is being printed. Even one division of the Finance Ministry official may not be able to meet another department employee as the underground path is constructed in such a way that each cannot meet the other.

Quarantine will start from February 22, 2023

From this date onwards there shall not be any exits from the printing press- There shall be a big iron door that separates the main entry. Any papers getting into the press will have to be handed over in a sealed trunk box.

Finance Minister Nirmala Sitharaman is to host a Halwa Party for all the officials of the Union Ministry of Finance to cheer up the team, Nirmala will go to the printing press and serve hot halwa from the oven to all the officials. From this moment it is an indication to the team ‘gear up’ for the Budget presentation.

How are the Budget papers despatched?

This is an interesting story. Highly trained sniffer dogs will be brought to the entry of point of the printing press to the quarantined place to escort the Budget papers after sniffing. This has been introduced in 2015 to save time for the sniffer dogs to sniff at the Parliament entry gate. Four lorries of CRPF with a Commandant escorting the Budget papers will be despatched from the printing press from 0945 hours on February 1, 2023.

They will guard the sealed gunny bags containing the budget papers – till such time say 1055 hours the Union Minister of Finance enters Lok Sabha escorted by the Prime Minister. 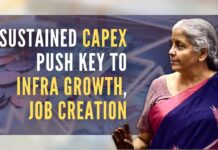