Sajid Mir, a top Lashkar-e-Taiba (LeT) operative and the main handler of the 26/11 Mumbai attacks has now been reportedly arrested by Pakistan. For years Pakistan had denied Mir’s presence and even claimed he was dead.

The case appears to have been brought to a head by Pakistan’s desire to extricate itself from the Financial Action Task Force‘s (FATF) international terror-financing watchlist.

Mir, involved in the November 2008 siege – when 10 terrorists carried out coordinated attacks on multiple targets in Mumbai, has been sought by both the US and India for over a decade. As many as 170 people of various nationalities — including six Americans were killed in the terror attack.

Hammad Azhar, Pakistan’s former finance minister in the recently ousted government of Prime Minister Imran Khan, and the man in charge of negotiations with the multilateral watchdog for the past three years told the media outlet that Pakistan took measures against Mir and other designated terrorists that were “satisfactory” to the FATF.

The task force has been keeping Pakistan on its grey list, used to monitor and isolate non-compliant countries. 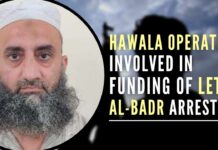 Jaish-e-Mohammad fidayeen squad attempted to disturb peace in Jammu ahead of...