In Mahabharata, Krishna started his campaign against Kansa with a protest against the income tax. He encouraged the dwellers of Gokul not to pay the income tax (Kar) imposed on them by Kansa. Escalation of the conflict between the people of Gokul and the state of Mathura culminated in Kansa’s death at the hands of Krishna. This episode has a striking resemblance to how the United States was founded. In 1765, the American Colonial Society rejected the authority of the British to levy taxes on the people of America. Escalation of this conflict resulted in the defeat of the British and the independence of America in 1776. Between 1776 and 1913, when the United States grew at its fastest pace to become a superpower, the country did not have an income tax (only corporate profits were taxed). The money people earned remained in their hands to be spent on what they deemed fit.

When Krishna tried to convince the people of Gokul not to pay their taxes, he pointed out to them how Kansa, as a king, had abdicated his primary responsibility of protecting the life and property of the people of Gokul. Mahabharata starts with king Bharat defining the role of a government (king). When he announced his decision not to hand over his throne to any of his nine sons, he described the three responsibilities of a king and emphasized that these are his only responsibilities. The first is to protect the life and property of the people from external attacks, the second is to provide justice to the people, and the third is to nominate a worthy successor.

Bharat did not mention redistribution of wealth as a responsibility of a king. It was Duryodhan who later violated this principle and started giving away money (gold) in the treasury (Raj Kosh) to the people of Hastinapur to get public opinion in his favor when he faced a threat from the Pandavas. Charity is embedded in the Hindu culture. A government, by enforcing redistribution, can only demonstrate its distrust of the people.

Since FDR’s new deal in the 1930’s, the U.S. has continued to abandon the principle of minimal taxation and limited government and has started walking on Duryodhan’s path. In 2008, after allowing gambling in the Wall Street casinos, the U.S. government stripped the constitution, laid down by the seven founding fathers, by bailing out the banks, in plain sight, the same way Duhshasana tried to strip Draupadi, wife of the five great warriors, in front of the people who were entrusted with the responsibility of protecting the fundamental principles of governance laid down by king Bharat.

The Indian government needs to learn from Mahabharata, and listen to Dr. Subramanian Swamy when he says that the government should abolish the income tax. The government can perform the three core functions prescribed in Mahabharata without the burden of income tax on the people of India.

It is strongly recommended that you read the following two articles to understand how important it is to get rid of the income tax, and to focus on empowering the judiciary. The article Republic of Ghaziabad – Part I explains in layman’s terms how income tax is impeding our economic progress. The article Breaking One Shackle Of The Fatal Conceit explains with the help of an analogy, how the government of India is making the same mistakes that have kept India trapped in poverty for seventy years. 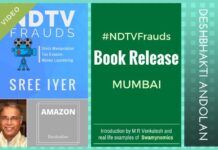 Sree Iyer speech at Mumbai at the launch of NDTV Frauds 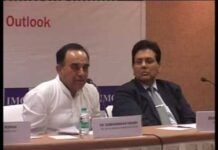 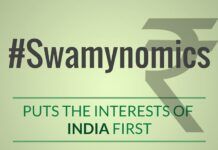 COVID-19 might push India into an economic crisis: The time to...