It was one of history’s major ironies when Khrushchev at his meeting with President Eisenhower at Camp David in 1958 remarked that the Soviets “are using the incentive system to increase production far more than the U.S” and that the American tax system “stifles increased productivity. Soviet Russia had a top income rate of only 13%. In January 1963, Kennedy, realising the self-defeating consequences of excessive taxation, proposed a bold measure of tax reform and the bill was passed by the Congress after his death wherein maximum marginal tax income tax rate was scaled down and minimum rate was reduced to 16% in 1965. As expected, the tax cuts had a galvanising effect on the national economy and actually increased the revenues of U.S.A enormously. The enormous upsurge in government revenues as a result of the tax cuts gave point to the joke current in Washington about a pre-Keynesian asking his up-to-date companion how the president is to pay for his new social programmes. The answer comes back “How Old-fashioned! Out of tax cuts, of course!

The tax measures of the German Government in the early 1950s represented an average reduction of 30% in both the personal and corporate rates of taxation. The then Vice-Chancellor of the German Federal Republic, Prof. Ludwig Erhard in “prosperity through competition, has expressed his unshakeable conviction that the record increase in the real net income of Germany in the last decade” – an annual rate of growth of 7.5% exceeded only by that of Japan 8.8% would have impossible but for the “incentive taxation’’ policy pursued by him.

In Japan, 1957, the rate of income tax levied on the average lower middle class and the upper working class was literally cut in half. Japan found that with every cut, the economy boomed and the exchange garnered golden grain.

Apart from the US, Germany and Japan, and other developed countries like Belgium and Holland have employed the fiscal stimulus and with Lower tax rates reaped ever richer harvests.

The case in India

The most expensive hobby of Indians is work. The rates of income-tax on individuals stifles his expenditure and savings in a big way. No other nation taxes the fruits of labour more heavily than India. i.e., with no job security, individual taxpayers have the least support from the government and their earnings from day one of employment.

Let us see some data points, patterns which constitute the backdrop of the argument on why personal income tax needs to be abolished: Tax foregone by Government due to abolishing of personal income can be pegged at 4.5 lakh crores, average. This can be recouped by auctioning available natural resources as happened in the case of #2G but abolishing personal income tax opens new avenues for taxation as well:

What stops from the abolishment of Personal Income tax?

The old-fashioned fiscal theory that income tax rates must be increased to provide larger revenues for the state has long been exploded. India pathetically clings to it despite inevitable disillusionment year after year.

Dr Subramanian Swamy has been at the forefront mooting this idea from the early 1970s by saying that the full potential of the people must be unleashed to create national wealth. He advocates – nation’s progress depends mainly on the extent to which people’s time and energy are released for productive purposes.

After the impact of COVID-19, such measures will help to bring back the economy on a fast track and people will be relieved from much anxiety and fear in terms of monetary considerations. 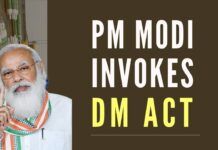