The National-award winning renowned Malayalam director, Ali Akbar announced that he has decided to renounce his Islamic faith following the incidents of several Muslims putting smiley emoticons below the posts and comments in social media and rejoicing the sad demise of a patriot, the Chief of the Defense Staff (CDS) General Bipin Rawat in a helicopter crash.

Ali Akbar made this announcement via a live session on Facebook. Akbar had raised his objections through a Facebook video after he witnessed the celebration of the Islamists online. He also posted a picture of the people who had mocked the demise of the CDS Bipin Rawat on his Facebook page.

“Today, I am throwing away an attire I received by birth. From today onwards, I am not a Muslim. I am an Indian. That is my reply to those people who posted thousands of smiling emoticons against India,” Akbar said in the video.

Ali Akbar informed that he took the decision to quit Islam after discussing the matter with his wife. He said that though he and his wife will convert to Hinduism and would do the procedures to change the religious details in their official records, he will not force his two daughters to convert. “It is their choice and I let them decide.

The director’s new name is ‘Ramasimhan‘. Akbar said, “My name will be Ramasimhan from tomorrow. Ramasimhan is a personality who was killed for sticking to culture. From tomorrow you can call me Ramasimhan. That is a good name.”

Earlier in 2015, Akbar made a sensational revelation that he was sexually abused by an ‘Usthad’ during his time in a madrasa. Akbar is in the process of making a film about the Malabar rebellion of Kerala. 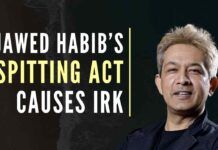