Eurotours CEO Helga Freund said that “many crises around Europe” have led to enormous demand for holidays in Austria due to its safety record.

[dropcap color=”#008040″ boxed=”yes” boxed_radius=”8px” class=”” id=””]T[/dropcap]he reputation of the country as a safe holiday destination has boosted its tourism industry this year, a leading domestic tour operator Eurotours said in a press release.

According to Freund, the “many crises around Europe” have led to enormous demand for holidays in Austria due to its safety record.

Furthermore, there’s been an increase in car travel over flying.

Germans continue to make up the largest group of foreign tourists in Austria. 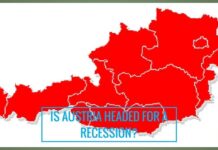 Is Austria headed for a recession?

China started building a bridge across the Pangong Tso (lake) to...