The Union Information and Broadcasting Minister Anurag Thakur on Monday took a dig at the Telangana Chief Minister K Chandrasekhar Rao for seeking proof of surgical strikes and pointed out that the Congress and Telangana Rashtra Samithi (TRS) should answer whether they are with the Indian Army or Pakistan.

Thakur said that the Telangana chief minister is furious and nervous after losing the Huzurabad Assembly bypolls.

“After a surgical strike in Huzurabad, his (Rao) tone has changed. Currently, he lost one election and this is the condition after losing one election, it clearly shows that KCR and TRS are losing ground in Telangana. At the time of the Uttar Pradesh polls, they are remembering surgical strikes. Congress and TRS sound similar to Pakistan. Whenever there is an election they do new experiments, be it hijab or surgical strike as they are unable to compete on development,” Thakur said.

Thakur claimed that the people are disillusioned with them and have faith in the developmental and welfare agenda of Prime Minister Narendra Modi and Chief Minister Yogi Adityanath. 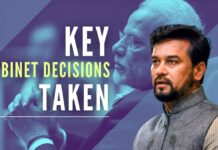