It is hoped that all Jammu-based politicians would follow the path charted by PM and HM and work in tandem to defeat separatists and Jihad.

The epoch-making decisions of PM Narendra Modi and HM Amit Shah to scrap divisive, discriminatory Articles 35A and 370 and create Union Territories of Jammu and Kashmir and Ladakh have divided senior Congress leaders at the national level. The story of the Congress in the UT of Jammu and Kashmir is no different. Two senior most Congress leaders — former Sadar-e-Riyasat Karan Singh and Leader of Opposition in Rajya Sabha Ghulam Nabi Azad — have spoken in different languages. It only indicated that things have started changing. It is a positive development.

No one had really expected that Karan Singh would support the initiatives of PM Modi and HM Shah on Jammu, Kashmir and Ladakh but it happened on August 8, the day Azad condemned the Modi Government in downright language. For, Karan Singh was a bitter critic of Narendra Modi’s Jammu and Kashmir policy till the other day. His interventions in the Rajya Sabha, his recent interviews and what he repeatedly said during the 2019 election campaign at different places in Jammu had all indicated that he was for the state’s special status. So much so, he had on occasions more than one asserted that the accession of the state to India was conditional – a statement which many exploited to support the outrageous suggestions of Kashmiri politicians that the state’s political future was yet to be decided.

I would not cross the line if I say that Karan Singh did oppose Article 370 but in a sophisticated manner.

Azad, who was not allowed to venture out of the Srinagar Airport and sent back to New Delhi, had, among other things, said: “Jammu and Kashmir State has been massacred by the Modi Government. People of the state have lost their identity after becoming part of a Union Territory from one of the largest and important States of the country one time…All the laws made by the State Government have been scrapped, Article 370 has been diluted and Article 35A has been taken out. One of the most famous States in the world has been divided into two UTs…The people of Jammu and Kashmir have lost their identity and the pride of the state, which once had a Maharaja and a Prime Minister and later for 18 years had the pride of having the President (Sadar-e-Riyasat). Jammu and Kashmir had a Governor and a Chief Minister. Today, it will have only Lt Governor. It is shame on the part of this (Modi) Government that this pride has been lost”.

In contrast, Karan Singh and his son Vikramaditya, who had lost the Lok Sabha election from the Kathua-Udhampur-Doda constituency to the BJP, took a line totally different from that of Azad. Both Karan Singh and Vikramaditya supported the Narendra Modi Government’s initiatives on Jammu, Kashmir and Ladakh and identified themselves with the nation’s mood. Karan Singh appreciated the creation of UT of Ladakh, abrogation of Article 35A, the idea of fresh delimitation, reservations for the SCs and STs and right to vote to the refugees from West Pakistan, the Valmiki Samaj and so on. He candidly said that he didn’t agree with a “blanket condemnation of the Government’s decision on Jammu and Kashmir and pointed out what he called were its several positives”. Of course, he didn’t comment directly on Article 370. But it didn’t matter much in the sense that he had extended his unflinching support to other features of the reform scheme as handed down to the nation by the PM and the HM. I would not cross the line if I say that Karan Singh did oppose Article 370 but in a sophisticated manner.

It would be only prudent to quote verbatim the relevant portion from what Karan Singh said to clinch the issue and put things in perspective. He said: “Ladakh’s emergence as UT is to be welcomed…The gender discrimination in Article 35A needed to be addressed as also the long-awaited enfranchisement of West Pakistan refugees and reservation for Scheduled Tribes will be welcomed. The bifurcation of the state meant there will be delimitation in future. There will be a fresh delimitation which, for the first time, will ensure a fair division of political power between Jammu and Kashmir regions”.

What does all this suggest? It suggests a radical change in the attitude of Karan Singh and Vikramaditya towards Jammu, Kashmir and Ladakh. A change which must have rattled the Azads, the Abdullahs, the Muftis and all those who never considered Jammu, Kashmir and Ladakh an integral part of India and those who vouched for such divisive and break-India demands as greater autonomy, self-rule, Indo-Pakistan joint-control over the state, dual currency, soft borders, demilitarization, Sharia banking and so on. A change which will go a long way in assuaging the hurt feelings of the people of Jammu and Ladakh. A change that suggests that Karan Singh and Vikramaditya have finally seen the writing on the wall and sensed the mood of the nation in general and of the people of Jammu and Ladakh in particular.

As far as Ghulam Nabi Azad is concerned, what he said in anger didn’t surprise anyone. He has lost his way. Actually, he had exposed himself in 2007, when his coalition government in Jammu and Kashmir rejected a number of nation-building Private Members’ Bills and introduced Sharia. The Private Members’ Bills which were rejected by his government included Bills on Secularism and Socialism, National Flag, Delimitation, Citizenship Rights to Refugees from West Pakistan and Life of the Jammu and Kashmir Legislative Assembly. All these landmark Private Members’ Bills were rejected in no time by the Congress, the PDP, the NC and the PDF lawmakers.

It is hoped that all Jammu-based politicians belonging to the Congress, the NC and the PDP would follow the path charted by PM Narendra Modi and HM Amit Shah and work in tandem to defeat separatists and Jihad. They need to appreciate the fact that the wall of hatred created by Articles 35A and 370 now stands demolished and Jammu, Kashmir and Ladakh stand integrated completely into India. They must say no to divisive and destroy-India Nehruvian model. 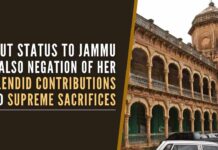 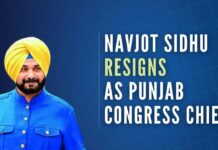