Yoga Yatra is a part of Azadi Ka Amrit Mahotsav

As India celebrates its 75th Independence Day, Adani Foundation has organized a yoga tour (Yoga Yatra) of Gujarat to mark Azadi Ka Amrit Mahotsav. Each of these yoga tour sites is of immense significance and many of these are revered religious sites.

The Yoga Yatra is a part of Azadi Ka Amrit Mahotsav, a Government of India initiative to celebrate and commemorate 75 years of independence. The yoga tour covers 75 heritage, tourist, archaeological sites, and landmark architectural sites across Gujarat.

The tour covers 75 heritage, tourist, and archaeological sites and landmark architectural sites across Gujarat. The sites were chosen to reflect the rich and vibrant cultural heritage of Gujarat.

The yoga performances across the state have been documented in the form of short films to showcase the benefits of yoga in the backdrop of Gujarat’s unique culture, history, architectural marvels, natural eco-system, and diverse geography.

A song, ‘Yog Karo‘, composed by Sachin-Jigar and sung by Shankar Mahadevan, has also been produced to raise awareness, highlighting the beauty of Gujarat and depicting various yoga positions. The elements of each asana or posture performed in this song are linked to that particular site, such as the performance of Simhasana, Vrukshasana, and Mayurasana at Gir Forest.

“Each episode of this Yoga Yatra reveals the beauty and grandeur of Gujarat by taking viewers and yoga enthusiasts on an immersive tour of the state’s most remarkable destinations and the innumerable facets of the practice of yoga,” said Dr. Priti Adani, Chairperson, Adani Foundation.

“Knowing, experiencing, and connecting with our ancient roots and cultural heritage is very important to discover who we were and who we should be. Yoga is India’s gift to the world. It is not just a path to fitness, but a journey to preventive healthcare and holistic wellbeing,” she added. 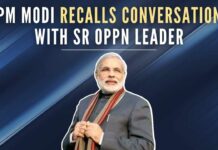 Railways to resume pre-Covid services soon, fares likely to be down...