In a stunning blow to the hitherto dominant Sunni sect, the Shia Waqf Board filed an affidavit in the Supreme Court on August 8, 2017 fracturing the united front put up by the Muslim community since the dramatic fall of the Babri Masjid on 6 December 1992, and asserting that the temple for Maryada Purushottam Sri Rama Chandra could come up at the Janmabhoomi site in Ayodhya, and a mosque could be raised at a reasonable distance in a Muslim-dominated area.

…the Shia Board explicitly asserts that the Sunni Board has no stake in Ayodhya as the mosque was Shia property; hence, “only Shia Central Waqf Board UP, is entitled to negotiate and arrive at a peaceful settlement with other remaining stake holders”.

As one of the parties to the dispute, the Shia Board claimed that the demolished mosque was a Shia mosque, as the alleged destroyer of the Rama Mandir was a Shia general named Mir Abdul Baqi; hence the mosque built upon the ruins of the temple was a Shia mosque. The Board indicated a desire for peaceful resolution of the dispute which the Supreme Court is not keen to adjudicate upon.

This is a stupendous development as hitherto, since 6 December 1992, all efforts to strike a deal with the Shia community have met with failure as community leaders in Lucknow always pleaded helplessness in opposing the strident Sunni community. The Babri Masjid Action Committee that spearheaded the movement against handing over the site to the Hindu claimants has been dominated by Sunnis. It was the Sunnis who reneged on the promise to the Government of India and the Supreme Court that they would surrender claims to the site if it was established that the mosque was built on the ruins of a temple.

That claim was conclusively proved in a Supreme Court-ordered and monitored excavation by the Archaeological Survey of India. But far from retreating gracefully, the BMAC dug its heels in and refused to retreat from the scene, resulting in a prolonged stalemate.

The sudden divergence of views between the Shia and Sunni Waqf Boards appears to reflect larger Shia-Sunni conflicts in the Muslim world, with Shias being targetted by jihadis in Pakistan and other Muslim countries, and their holy sites desecrated. Iran, the self-proclaimed protector of Shias worldwide, has facilitated the spectacular victory of the Syrian Arab Army against Islamic State jihadis in Syria, thus enabling the survival of the Alawite (Shia) regime headed by Basher al-Assad; it has also prevented Yemen from crumbling before the Saudi assault.

Now, the Shia Board explicitly asserts that the Sunni Board has no stake in Ayodhya as the mosque was Shia property; hence, “only Shia Central Waqf Board UP, is entitled to negotiate and arrive at a peaceful settlement with other remaining stake holders”.

The Board further opined that proximity of “place of worships should be avoided in as much as both denominations using loudspeakers tend to disturb the religious performance of each other often leading to conflicts and acrimony”. Therefore, “to bring a quietus to the issue, Masjid can be located in a Muslim-dominated area at a reasonable distance from the most revered place of birth of Ram.”

Reports claim that the Shia Board decided late July to stake claim to the Ayodhya site. Such a momentous decision could hardly be taken overnight. It seems likely that Yogi Adityanath, head of the non-communal Gorakhnath Peeth, was selected as Uttar Pradesh Chief Minister by Prime Minister Narendra Modi precisely to accomplish an acrimony-free transfer of the sacred site for the Rama Temple. Should this be accomplished, it would be a far greater feat than rebuilding the Somnath Temple in Saurashtra, where the only resistance to be overcome was that of Prime Minister Jawaharlal Nehru.

Certain Arabic inscriptions in the disputed structure, cited in previous judgments, establish beyond doubt that the mosque was built by Mir Baqi, a Shia Waqif…

In Civil Appeal No. 10836-10867 of 2010, the Shia Central Waqf Board through its chairman, Syed Waseem Rizvi (Respondent No. 24), filed a counter affidavit asserting that the ‘Babari Masjid’ was a Shia Waqf and not a Sunni Waqf as claimed by the Sunni Central Waqf Board UP. As the Allahabad High Court judgment stated that “Muslims” should get not less than one-third of the disputed area, chairman Rizvi asserted that this obviously alluded to “Shias” as the High Court had rejected the Sunni Board’s claim (based on Notification dated 16 February 1944 by the Chief Commissioner of Waqfs under the Muslim Waqfs Act, 1936) that Babari Masjid was a Sunni Waqf.

The High Court declared the said Notification of 16 February 1944 as illegal as it was issued in violation of provisions of the 1936 Act, as it was made without issuing a notice to the interested persons, which was a statutory requirement. It follows that the Waqf was a Shia Waqf as a waqf must always be Shia or Sunni, according to its creator (Waqif).

Certain Arabic inscriptions in the disputed structure, cited in previous judgments, establish beyond doubt that the mosque was built by Mir Baqi, a Shia Waqif, who created a Shia waqf. All mutawallis, including the last one (1949) were admittedly Shia and were descendants of Abdul Baqi, a Shia from Ispahan (Persia). It is notable that the Baqi family tree has not been seriously challenged. Verses engraved on a tablet in the central arch of the mosque describe Mir Baqi as an ‘Ispahani’, a resident of Ispahan.

On 30 March 1946, the Faizabad Civil Judge, S.A. Ahsan, ruled that it was inconceivable that a Sunni waqif would appoint a Shia mutawalli, or vice versa (Regular Suit No.29 of 1945).

The affidavit states that Muslims must ponder that the entire world wants to know the exact teaching of Islam in respect of the relationship of Muslims with others. Indian Muslims, it says, enjoy a unique position. They have been rulers, they have been ruled and now they are sharers in power. They are not in majority but they are also not a negligible minority and are in fact the most populous Muslim community in the world after Indonesia. As legatees of a huge corpus of religious knowledge, Indian Muslims are exceptionally placed to tell the world the true teachings of Islam, beginning with a resolution of the Ayodhya dispute.

The Allahabad High Court proclaimed Muslims, Hindus and Nirmohi Akhara as joint title holders to the disputed premises and allotted them one-third share each, with the stipulation that the portion beneath the central dome, where the murti of Sri Rama is installed, would be allotted to Hindus in the final decree. The Nirmohi Akhara would receive the portion including the Ram Chabutra and Sita ki Rasoi, and the parties could make minor and mutual adjustments while dividing their respective shares.

The Shia Waqf chairman observed that the intent of this judgment was that the parties amicably settle the dispute, and his sect was willing to do so. As there has been no dialogue in the matter in the past seven years, he urged the Supreme Court to appoint a Committee headed by a retired Judge of the Supreme Court and two retired Judges of the Allahabad High Court, with the Uttar Pradesh Chief Minister (or his nominee) and a nominee from the Prime Minister’s Office. The nominees of the Shia Central Waqf Board UP, Nirmohi Akhara and Hindu sect, would offer suggestions for an amicable settlement to this committee.

The Shia leader added that the Sunni Central Waqf Board UP was dominated by “Sunni hardliners, the fanatics, and nonbelievers in peaceful coexistence, who have absolutely no stake in the present case”. As Babari Masjid was a Shia Waqf, the Shia Central Waqf Board UP alone is entitled to negotiate a peaceful settlement with other remaining stakeholders.

Chairman Syed Waseem Rizvi further informed the Court that after his views became known, he had received threats from the hardliners, and had informed the Government of Uttar Pradesh, which is reportedly taking steps for his security. He reiterated the keenness of the Shia sect for amicable settlement of the dispute.

Should the Supreme Court constitute such a committee, this could be a very different Diwali. 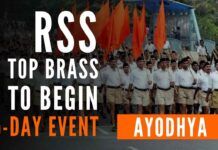 Somebody needs to teach AMU a lesson. Who will do it?