“Fin Minister will introduce Insolvency and Bankruptcy Bill in Parliament tomorrow. Next GST, it’s the biggest reform (sic),” tweeted Shaktikanta Das, secretary in the Department of Economic Affairs, on Sunday.

The government intends to bring important legislative measures on structural reforms during the remaining three days left of parliament’s winter session, notwithstanding the setback on the GST Bill, Jaitley had said on Saturday.

The proposed Bankruptcy Code aims to reduce delays in resolution of insolvency cases and improve recoveries of amount lent to companies. The draft bill has proposed a timeline of 180 days, extendable by another 90 days, to resolve cases of bankruptcy.

The new Bankruptcy Code will help India in the World Bank’s ease of doing business ranking, as per a key criterion set by the multilateral lender.

Sharply revising downwards the projected gross domestic product (GDP) growth for this fiscal by one percent to the 7-7.5 percent range, the government on Friday said the decline in nominal GDP growth will create challenges for meeting the current fiscal deficit target of 3.9 percent of GDP.

“Slower than anticipated nominal GDP growth will itself raise the deficit target by 0.2 per cent of GDP,” the finance ministry said in its Mid-year Economic Review tabled in parliament.

“The anticipated shortfall in disinvestment receipts, owing to adverse market conditions for a portfolio that largely comprises commodity stocks, will add to the challenge,” it said.

At an all-party meeting held by Rajya Sabha chairman Hamid Ansari on Friday, the opposition, after weeks of confrontation on various issues, agreed to the passage of certain bills in the Rajya Sabha during the last week of the session, but consensus was elusive on the GST bill.

“However, GDP growth has been powered only by private consumption and public investment is a concern. The proposed wage hike for government workers may impact plan for next fiscal,” the report said.

Jaitley, in his February budget, had extended the target deadline for controlling fiscal deficit to three percent, reasoning that insistence on a timetable to contain the deficit would harm growth prospects.

India’s fiscal deficit has touched 74 percent of the annual target as on end-October, even as tax revenue is below the half-way mark, as per the latest official estimates of the central government accounts released late last month. 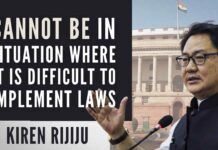