“I cannot stress too much that Britain is part of Europe, and always will be. There will still be intense and intensifying European cooperation and partnership in a huge number of fields,” said Johnson in an article carried by Sunday’s Daily Telegraph newspaper.

Johnson is apparently trying to allay the more than 16 million Britons who voted to remain. “They are our neighbors, brothers and sisters who did what they passionately believe was right,” he said.

“We are much better together in forging a new and better relationship with the EU — based on free trade and partnership, rather than a federal system,” said Johnson.

The Leave camp won nearly 52 percent of the vote, while Remain counted for a little more than 48 percent, a margin too narrow to persuade some of the most radical believers in an EU future for Britain.

[dropcap color=”#008040″ boxed=”yes” boxed_radius=”8px” class=”” id=””]T[/dropcap]hey have launched a petition to Parliament calling for a second referendum on Britain’s EU membership. The drive has gathered more than 1 million signatures by midday Saturday.

The petition demands a change in the law to pave the way for a re-run of Thursday’s national vote. It calls for a majority of 60 percent and a turnout of 75 percent before any change in Britain’s EU membership can take place. The petition was gaining pace at a rate of thousands of signatures every hour.

Johnson said there will continue to be free trade with the EU members, and access to the single market.

It would also be hard for Britain to continue relations with the bloc’s banking sector unhindered.

Britain will have to continue complying with European rules after the fallout if it wants to keep access to the single market, said de Galhau.

“This process should start as soon as possible,” said German Foreign Minister Frank-Walter Steinmeier after a meeting with his counterparts from France, Italy, the Netherlands, Belgium and Luxembourg.

The aim must be “not to fall into a prolonged stalemate,” said Steinmeier

Notes: – Xinhua (This story has not been edited by PGurus.com and is generated from a syndicated feed we subscribe to). 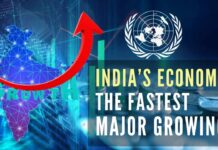 India and European Union to establish Trade and Technology Council

What are the chances of a Grand Alliance in Bengal?

Halloween to give heebie-jeebies to Delhiites