[dropcap color=”#008040″ boxed=”yes” boxed_radius=”8px” class=”” id=””]I[/dropcap]ndian culture spans across the Indian subcontinent and has been influenced by a history that is several millennia old. Many elements of India’s diverse cultures, such as Indian religions, yoga and Indian cuisine, have had a profound impact across the world.

…the functional spectrum of the Department ranges from creating cultural awareness at the grassroots level to international cultural exchanges.

The mandate of the Department of Culture is entrusted with the preservation, promotion and dissemination of the rich art and culture of the country. The manifold activities of the Department include maintenance and conservation of our ancient monuments; promotion of the literary, visual and performing arts, administration of archives, libraries and museums, research and development in the conservation of cultural properties, and entering into cultural agreements with foreign countries. Thus the functional spectrum of the Department ranges from creating cultural awareness at the grassroots level to international cultural exchanges. Although the prescribed objectives and policies of the Government are implemented through various schemes operated departmentally, it is by the funding of autonomous organisations and through a well-developed infrastructure of attached and subordinate offices, that these ideals come to fruition.

If the current situation is analysed then it is very clear that the healthy relation which used to exist between the Ministry and the institutions under its control, has come to an end. The reason behind this negative and near collapse situation is the existing structure in which the officials of the Ministry have an insensitive approach towards these organisations, which were established with a mandate to promote and preserve the culture of our country. Instead of working towards the betterment of these organisations the current bureaucrats who are serving this Ministry, have proved that they don’t want these organisations to rise and are trying to fulfil their own hidden personal agendas by maligning these institutions. Their chosen modus operandi for fulfilling their malicious goals is to encroach upon the autonomy that was vested in these organisations.

In a recent development, the Secretary Culture had established an AB Cell to review the working of the autonomous organisations that come under the Ministry of Culture. The mandate of this Cell is not clear till date but from its working it is very much clear that this Cell was formed by disgruntled officials whose main aim is to harm the premier organisations who are promoting Indian culture in international arena.

[dropcap color=”#008040″ boxed=”yes” boxed_radius=”8px” class=”” id=””]T[/dropcap]he current serving employees of the Ministry are supporting the organisations/ groups/ individuals that are playing a key role in anti-government activities like the AwardWapsi group. These serving bureaucrats lack the necessary orientation for running the pivotal and nodal Ministry of the Government of India. It is important here to mention that a few months back an Advisory Committee for the Lalit Kala Akademi was constituted by the Minister of Culture; but till date as per the records of the Akademi this decision has not been communicated from the Ministry of Culture to the Akademi. But to everyone’s utter surprise, this information was leaked from the Ministry and made public as it was uploaded on the blog of an individual who has been a habitual litigant against the Lalit Kala Akademi and is involved in anti-government activities as well.

It is significant to note that during the last 3 – 4 years all the court cases against the Ministry of Culture, Government of India, and the Lalit Kala Akademi were filed by the trustees of the Raza Foundation viz. artists – Akhilesh and Manish Pushkale.

Ashok Vajpeyi, former Chairman of the Lalit Kala Akademi, is one of the founding trustees of the Raza Foundation. It is significant to note that during the last 3 – 4 years all the court cases against the Ministry of Culture, Government of India, and the Lalit Kala Akademi were filed by the trustees of the Raza Foundation viz. artists – Akhilesh and Manish Pushkale. There are accounts which make a glaring revelation that Vajpeyi has a personal interest in the Raza Foundation with which he was continuing his association as Founder Trustee even while he was the Chairman of Lalit Kala Akademi (LKA) and that to benefit the Raza Foundation he violated all norms and rules of the LKA, Government of India. Needless to mention that Vajpeyi is the same person who engineered the AwardWapsi campaign against the present Government and the serving bureaucrats of the Ministry instead of taking stringent action against such individuals are promoting activities which are being undertaken by this organisation which is working on a non-ethical code.

From the published articles in the leading national dailies it is clear that the officials of the Ministry are intentionally trying to malign the image of the organisations which comes under their jurisdiction by providing access to the official documents which are confidential. Instead of promoting these organisations by giving them the autonomy to fulfil their established mandate and to take Indian culture to a new height on an international level, these officials are creating hurdles so that the allocated funds cannot be utilised by these organisations to fulfil their role.

[dropcap color=”#008040″ boxed=”yes” boxed_radius=”8px” class=”” id=””]T[/dropcap]he present scenario is full of anarchy where the serving bureaucrats are patronizing and shielding people against whom serious charges have been levelled. To fulfil their vicious agenda these officials are misusing their stature and are harming the organisations and their staff. This is an alarming situation where serious matters related to financial and administrative mismanagement should be thoroughly probed.

If the assessment is done of the performance of the Ministry of Culture in the past few years, then it shall be clear that its performance has not only declined but has also lost its glory on a global level.

The Prime Minister has a vision to take India to a new zenith and to bring the country together by reaching out to the masses at the grassroots level. Initially the Secretary, Culture, under compulsion, had announced many programmes like the Village Outreach programme, DTH channels, interpretation centres, etc. but till date, no compliance has been done on these. This shows that matters are being initiated but there is no mechanism in place to keep a check on these important matters which should have been dealt with great sincerity. The programmes that are being organised by the Ministry of Culture lack a vision due to which these programmes lack grace. If the assessment is done of the performance of the Ministry of Culture in the past few years, then it shall be clear that its performance has not only declined but has also lost its glory on a global level. It may be noted that no international event or any new centenary programme has been initiated by it since many years.

In the light of the above findings, it is apparent that instead of using the available resources, these officials to fulfil their hidden agenda are promoting anti-government activities and are creating vengeance against those organisations which have brought glory to this Ministry time and again. 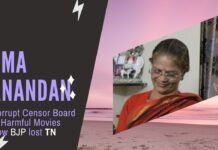 The PIL Circus and the CBI Special Director