An FIR has been filed against former Bihar chief minister Jitan Ram Manjhi’s daughter regarding her daughter-in-law’s death in Gaya district, police said on Monday.

A case was lodged against Sunaina Devi and four other family members by deceased Soni’s father in Delha police station in Gaya town, about 100 km from here.

“Ramdev Manjhi, father of Sunaina’s daughter-in-law, filed an FIR alleging that his daughter was murdered by the accused for more dowry,” a district police official said.

Ramdev told the police that the accused cremated his daughter without informing them.

He said his daughter was married to Sunaina’s son Vicky in 2008. 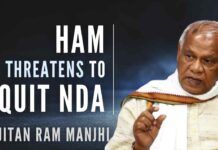