Mehbooba Mufti demanded a thorough CBI probe against Dr Abdullah and alleged that it is on the basis of an authorisation letter that J&K Bank had transferred a sum of Rs 1.90 crores into the accounts.

Cricket administrators in India are already facing a tough time. The latest entry in the club is of former J&K Chief Minister and sitting Parliamentarian from Srinagar Lok Sabha seat Dr Farooq Abdullah.

On Monday, the Central Bureau of Investigation (CBI), probing multi-crore cricket scam in J&K, filed a charge sheet against him.

Along with him, the then General Secretary Salim Khan, the then treasurer Afsan Ahmed Mirza and the then executive of J&K Bank Bashir Ahmed Misghar have also been charge-sheeted.

Though it is too early to comment on the outcome of the case but under the prevailing political situation in the state it will surely impact the polity in the coming times.

Reacting to the development in the court BJP Chief spokesman in Jammu Sunil Sethi told reporters, “Dr Farooq Abdullah is going to face tough times ahead during the long drawn legal battle”.

He said more than that ” I am surprised, if CBI has named him in the charge sheet in the 113 crore cricket fund scam why the person has not been arrested so far”.

He said more than 80 crores has been siphoned off and the person is yet to be arrested.

Commenting on the impact of the case on the National Conference BJP Chief Spokesman said, “the image of the party would be affected in the eyes of the voters”.

“People will think if the head of the party and a seasoned politician like Dr Farooq Abdullah is allegedly involved in multi-crore scam why should we trust the party”.

One of the senior National Conference spokesman Dr Sameer Koul reacted first on his twitter timeline. He tweeted, “No surprise. Echoes of Pakistan. The runup to India elections 2019@political victimisation at its worst”.

In the absence of Dr Farooq Abdullah from Srinagar, former Chief Minister and Dr Abdullah’s son Omar Abdullah also reacted to the latest development on his twitter timeline.

Omar tweeted, “In light of the developments in the Jammu and Kashmir Cricket Association (JKCA) matter this is our response. I will not be addressing this issue separately except to say I have no doubt at the end of the legal process my father will be found innocent & free of any allegations of wrongdoing”.

In 2015, the Jammu and Kashmir High Court handed over the investigation of the scam to the CBI while indicating the state police for failing to carry out the probe

The statement issued by the National Conference spokesman is being reproduced here:

“President Jammu Kashmir National Conference, Dr Farooq Abdullah has full faith in the judicial system and re-asserts his commitment to cooperate with the honourable court’s proceedings in the matter relating to certain financial transactions of the Jammu and Kashmir Cricket Association.

Pertinently, it is important to yet again highlight that it was Dr Farooq Abdullah who sought the registration of an FIR relating to this matter in the first place.

Dr Farooq Abdullah has led his life guided by the strictest principles of selfless public service and probity. He is certain that truth shall prevail. The rank and file of the party draws inspiration from Dr Farooq Abdullah’s resolve to fight earnestly for the truth to be upheld and continues to fully support him in this endeavour”.

Time Line of the case

Initially, some of the office bearers were accused of siphoning off huge sums of money it got from the Board of Control for Cricket in India (BCCI).

As more and more allegations surfaced cracks emerged within the JKCA. More skeletons tumbled out from the closet as political slugfest went on between the rival political parties in Kashmir valley.

Armed with documentary proof PDP Chief Mehbooba Mufti had first dragged Dr Abdullah’s name in the case claiming she is in the possession of an authorisation letter signed by Dr Farooq Abdullah.

Demanding a thorough CBI probe and registration of an FIR against the JKCA President Mehbooba alleged that it is on the basis of this authorisation letter the J&K Bank had transferred a sum of Rs 1.90 crores into the accounts.

Following these developments, the BCCI stopped all monetary transaction impacting the cricket players and expansion of cricket infrastructure in the region.

Dr Farooq Abdullah was interrogated by a CBI team in the alleged scam on January 10, 2018.

In 2015, the Jammu and Kashmir High Court handed over the investigation of the scam to the CBI while indicating the state police for failing to carry out the probe in which former chief minister Farooq Abdullah has been named.

While referring to Abdullah’s name in the scam and citing reasons for handing over the probe to the CBI, the court had said that the president of the JKCA is a “tall political personality” having served as the CM of the state and served as the Union minister in the previous government.

His complicity is alleged in granting approval to two contradictory resolutions pertaining to the operation of bogus accounts of the JKCA to keep accused Ahsan Mirza in control of financial matters despite his ceasing to be a treasurer after the 2011 elections.

The court had also said that since the embezzled funds have allegedly originated from BCCI in Mumbai, the Crime Branch would encounter a lot of hassles in investigations as its jurisdiction is limited to the state.

Dr Abdullah had clarified that a unanimous resolution was passed by the JKCA in Srinagar to repay the loan amounting 1.90 crores to the treasurer Ahsan Ahmad Mirza.

While skeletons started tumbling out of the closet fissures surfaced within the JKCA too immediately after the expose.

The duo had withdrawn a huge amount from the Association funds, given to it by Board of Control for Cricket in India (BCCI) as State share through self-cheques.

In a written statement Goni went on to claim that Ahsan Mirza has owned the responsibility for the shortfall of funds incurred by Association through the opening of bogus bank accounts in Khanyar and Air Cargo branches of J&K Bank and he (Mirza) has offered to deposit the shortfall amount with the JKCA.

Goni said the then General Secretary and the then Treasurer of the Association have opened these bogus accounts and illegally operated them without reflecting these bank accounts in the balance sheet of JKCA.

Dr Abdullah tried to put up a brave front in front of media but he too faced many difficulties to come clean out of the mess.

More than two weeks after the first FIR was lodged by the JKCA Chairman against the two close confidantes of the Dr Abdullah, Saleem Khan and Ahsan Ahmad Mirza, to probe charges of misappropriation of funds it appears that the cover-up launched by the President of the cricket body also turned out to be a murky affair, raising many an eyebrow in the state.

Terming allegations against him as ‘baseless’ and ‘frivolous’ Dr Farooq Abdullah had earlier defended himself on March 12, 2012, in New Delhi by making public a copy of the JKCA resolution.

The resolution dated June 27, 2008, was signed by Dr Farooq Abdullah and the then General secretary Saleem Khan.

Dr Abdullah had clarified that a unanimous resolution was passed by the JKCA in Srinagar to repay the loan amounting 1.90 crores to the treasurer Ahsan Ahmad Mirza.

The interest-free loan was advanced by Ahsan Ahmad Mirza from time to time for running the affairs of the JKCA, the resolution had stated.

Surprisingly, Dr Farooq Abdullah was not present in India on the given day.

He was present in London as an invitee of the Indian media house which had organised a conference India-Pakistan -Designing a New Future at the Royal Society of Arts.

During the same period, the Kashmir valley was on the boil and a day later on June 28, 2008, PDP Chief Mehbooba Mufti had decided to pull out of the coalition govt headed by Ghulam Nabi Azad over the Amarnath Land row.

Mehbooba questioned Dr Abdullah to explain when he was present in London on June 27, 2008, how he could sign a resolution in Srinagar.

After this startling revelation, the PDP Chief Mehbooba Mufti has once again raised question marks over the murky deals going on in the JKCA in the name of promoting cricket in the state.

Mehbooba Mufti had even accused the UPA government of turning a blind eye to the allegations of corruption in the cricketing body headed by a Union Minister Dr Farooq Abdullah.

Pointing fingers against the working of the state government headed by Omar Abdullah Mufti rejected the ongoing investigation as ‘big drama’. She claimed that police officials investigating the case have been instructed to ‘go slow’ in the case.

“Mere registration of an FIR against the members of the cricket association is nothing but a ‘big drama’ enacted at the behest of vested interests. She accused Dr Farooq Abdullah of siphoning off the cricketing body funds through his coterie.

She charged that only 10% of funds were distributed among the close confidantes of Dr Abdullah while rest of the 80-90 % funds were siphoned off by him.

Mehbooba questioned Dr Abdullah to explain when he was present in London on June 27, 2008, how he could sign a resolution in Srinagar.

During the two day conference, Dr Abdullah had chaired a session on Kashmir in the presence of Ex-ISI Chief Lt-Gen Asad Durrani and BJP Leader Arun Jaitley. 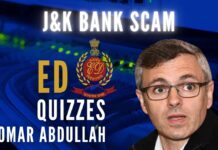