Ola, Uber get notices for alleged 3,200 complaints in 1 month

The Department of Consumer Affairs, in a meeting with ride-hailing companies Ola, Uber, Rapido, Meru Cabs, and Jugnoo, directed them to become convergence partners in the National Consumer Helpline, to enable better grievance redressal for consumers and also comply with Consumer Protection Act, 2019 and E-commerce Rules.

The notice mentioned an unreasonable levy of cancellation charge wherein users are not shown the amount of time within which cancelling a ride is permitted.

“The amount of cancellation charge is not displayed prominently on the platform before booking the ride. Undue cancellation charges are borne by users when they are forced to cancel the ride due to the unwillingness of the driver to accept the ride or come at the pick-up location,” said the watchdog.

The primary issues raised in the notice are deficiency in service which includes lack of proper response from customer support, driver refusing to take payment by online mode and insisting on a cash only, the higher amount charged despite going on the same route previously at a lesser charge, unprofessional driver behaviour and driver refusing to switch on AC when the consumer is promised AC ride on the app.

The CCPA also raised inadequate consumer grievance redressal mechanism in absence of both customer care number and details of grievance officer as required to be mentioned on the ride-hailing platforms.

There is also a lack of any information on the algorithm or method used by the company to charge different fares for the same route from two individuals”.

“It may be mentioned that a significant number of complaints have been lodged by consumers across the country on multiple issues which affect their rides booked through both the ride-hailing platforms,” the ministry said.

On Thursday, Uber India’s Director of Central Operations Nitish Bhushan said that the company is “reinforcing service quality expectations with drivers, especially in areas like cancellations and ensuring AC rides”.

“In addition to driver notifications and training, repeated complaints from riders on these service quality essentials could lead to penalties and even restricted app access,” Bhushan added.

He, however, did not elaborate on if any penal action was initiated against the errant drivers, as 770 grievances were registered against Uber in the month of April via the National Consumer Helpline, like a paid amount not refunded, unauthorized charges, charging more than MRP, among others.

The Department of Consumer Affairs is set to issue new guidelines related to surge pricing and ride cancellations by ride-hailing platforms soon that will give some reprieve to the end-users.

CCPA’s head Khare had given the ride-hailing platforms 30 days to fix their algorithms related to ride cancellations and surge pricing, or else they will be penalized. 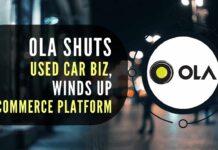