PR gimmick to display name on an Australian building caught!

The Left-ruled Kerala Government’s attempt to glorify its “achievements” in COVID-19 using a sneaky Public Relations (PR) trick has been exposed and stands bare for its bald-faced lies. Kerala Government’s PR team aided by many Left-leaning journalists were heaping praise on the Kerala Chief Minister Pinarayi Vijayan and State Health Minister K K Shailaja on the “stellar” work they did battling the pandemic. Many media houses in the National and International circuits got into the act and went into a tizzy at the “achievements” of the state. It was somewhat similar to Delhi Chief Minister Arvind Kejriwal-led Aam Aadmi Party Government’s tall claims on the “World Class Mohalla Clinics” articles that appeared in international media like the New York Times.

But this time the Kerala Government or its coterie of crony journalists and their PR tricks have fallen flat. On Sunday (April 19) and the following day, many media houses flashed a photo of a big tower in Melbourne in Australia having a big display of “Thanks Giving message” to the Chief Minister Pinarayi Vijayan for his great work (nothing in Kerala PR is less than “great” – it was a “great agitation” in Jamia in Dec 2019) to prevent the COVID-19 pandemic. Even videos were shown on TV channels.

Now it has come to light that this was a building owned by the Australian mobile phone company Telstra who will display anyone’s name sent via SMS, for a fee. The Telstra will display the name mentioned in the SMS request and also provide the display photo of the name in their big display board. According to many Kerala Congress and BJP leaders, this cheap trick was engineered by a former party cardholder journalist Thiruvallam Bhasi who now lives in Australia. The Opposition party leaders accuse that this photo of the display board of Telstra company office was first posted in Kerala’s journalists’ WhatsApp Groups by Bhasi, which ultimately turned into big news only to fall flat when its fakeness was exposed.  BJP leaders accuse Bhasi, who is engaged in the recruitment business, has started his Left party activities in a covert fashion in Melbourne and is engaged in anti-CAA protests in Melbourne. They accuse him of floating a covert organization called Melbourne Secular Forum to promote anti-Central Government and anti-BJP campaigns. Bhasi’s photo of Thanks giving to Pinarayi Vijayan display board was published in all media by Vijayan’s media managers and party-affiliated journalists like John Britas and P M Manoj, accuse BJP leaders.

The whole gimmick was exposed soon when Social Media warriors found the Tweet of Telstra CEO Andrew Penn offering to display their name by sending a chargeable SMS.

To show thanks to the everyday heroes helping us get through these times, we’ve opened up our Bourke St billboard to the nation. To #SayThanks to someone, txt 0484 842 657 with “Thanks __ for __” and you’ll get an image back of your message up in lights. https://t.co/cbcpEl7j7I pic.twitter.com/RkDybijwnl

Finding the Mobile phone CEO’s Tweet, many Keralites started sending chargeable SMS to Australia and got their names also in the Display Board like Pinarayi Vijayan’s name displayed and started posting it in Social Media making a total mockery of the PR attempt by Left Journos.

Now the media organization which praised Pinarayi Vijayan has come out with a retraction that they were fooled, on the false report of Australia honoring the Chief Minister for his “glorious work” to fight COVID-19. 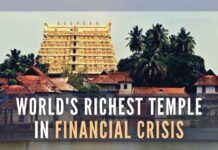