The former Finance Minister P Chidambaram (PC) is acting like an Ostrich as far as matters related to the ICICI Bank are concerned. The normally garrulous man, who will wax eloquent on any topic, including the price he had to pay for a teabag at Chennai airport[1], is maintaining a studied silence on ICICI. It is a known fact that Chanda Kochhar, Shikha Sharma, and Kalpana Morparia formed the ‘teen deviyan’ at ICICI[2] and Kochhar was allegedly handpicked by her mentor K V Kamath, who was very close to PC.

The Public Sector Undertaking firm of Oil and Natural Gas Commission (ONGC) was asked to buy a 10 percent  stake in Videocon’s Mozambique project. For this, ONGC overpaid around 200 million dollars to Videocon.

As per the statement issued by ICICI on March 28, three days after PGurus’ exposé of 10% money trail to Chanda Kochhar’s husband Deepak Kochhar’s firm[3], the ICICI Bank in 2012, in consortium with 20 other banks provided Rs.40,000 crores ($6 billion) to debt-ridden Videocon Group’s Oil and Gas exploration at Mozambique.

This is apart from the controversial Rs.3250 crores ($491 million) loan disbursal to Videocon Group’s firms abroad during the same period. According to ICICI Bank, this dubious loan was also part of a consortium and ICICI Bank has only 10 percent exposure and the rest 90% is financed by other bankers. However, ICICI Bank cleverly left out the names of the other bankers.

Who was the Finance Minister from mid-2012 onwards? Mr. Chidambaram. He must be aware of the entire rollout of the Rs.40,000 crore loan to Videocon Group by the 20-bank consortium for the Oil and Gas project in Mozambique. Further, the name of the agency which charged 5 percent commission in all high volume loans has come out. In ICICI Bank, the high volume deals were processed through an agency owned by Chanda Kochhar’s brother-in-law Rajiv Kochhar[4].

It is difficult to believe that Chidambaram did not know of all these deals as Chanda Kochhar was always seen to be on good terms with him. Therefore it comes as a surprise to see Chidambaram observe total silence in this matter. While this 800-lb gorilla in the room (ICICI scam) was occupying the news space, Chidambaram was seen talking about petroleum prices, what can be at best be compared to a mouse. When his son was cooling his heels in the jail in connection with INX Media, PC was seen running between Supreme Court to trial court, but always managing to find something else to tweet and write about in the media.

In 2013, the UPA managed to do a scam in this oil deal too. The Public Sector Undertaking firm of Oil and Natural Gas Commission (ONGC) was asked to buy a 10 percent  stake in Videocon’s Mozambique project. For this, ONGC overpaid around 200 million dollars to Videocon. This is nothing but a classic instance of Crony Capitalism in India. Indian banks will pay money for Videocon and later the public sector ONGC will buy shares from Videocon’s project at exorbitant rates[5].

As a Finance Minister Chidambaram must be aware of this high volume purchase by ONGC to benefit Videocon. Now the Central Bureau of Investigation (CBI) and the Enforcement Directorate (ED) are expected to call Chanda Kochhar, her husband and Videocon owners. Will they call Chidambaram too, the man who approved/ consented to these dubious deals?

[4] Governor Patel claimed RBI has more power over private banks. Will it use them now? Apr 3, 2018, MoneyLife.in 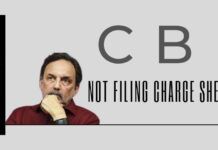 Chidambaram parked 40 million dollar bribe got from Aircel-Maxis deal in...

IT Raids on Karnataka Energy Minister – What next?